Nowadays, the amount of time it takes to resolve any given incident... is incredibly short. Those of you who earn your provisional licenses will be confronting such situations that unfold at a breakneck pace. Those who can't keep up are doomed to fail.
Yokumiru Mera in "The Test"

Yokumiru Mera (, Mera Yokumiru?)[1] is a worker for the Hero Public Safety Commission.[2]

He is currently the acting president of the HPSC, due to the regular president being injured during the Paranormal Liberation Fronts attack on the commission headquarters.[3]

Yokumiru is a lanky middle aged man with beige, chin length, messy hair. He is dressed in a formal black shirt with a white undershirt, his shirt is followed with equally black pants. He wears a loose tie and black shoes. He completes his look with a microphone for general speeches and commentating.

His eyes are framed with small but noticeable bags caused by lack of sleep. 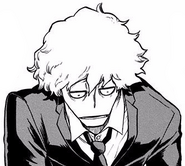 Yokumiru suffers from sleep deprivation due to overworking, something that he tends to complain about frequently. This leads to him having a blasé and an unenthusiastic attitude while working. He had shown to be very disinterested during the Provisional Hero License Exam, and was only looking forward to the end of the exam where he could finally get some rest.

Despite this however, he can also be quite inspirational at times, such as when he gave a speech about the next generation of heroes having to take the mantle from their superiors at the end of the Provisional Hero License Exam. He also gave the students who failed hope at still gaining their licenses through remedial courses.

Yokumiru Mera is in charge of supervising the Provisional Hero License Exam. He begins by telling to all the examinees inside Takoba National Stadium how tired he is and how the Commission is understaffed. Yokumiru then explains that the exam is a free for all and how the first challenge works, only the first 100 students out of the 1540 gathered to take the exam who complete the first test will move onto the next one.[4]

When the first test begins, Mera is in charge of commenting on its development, announcing when an examiner passes. Shortly after starting, he receives the report that Inasa Yoarashi is the first examiner to pass after eliminating 120 examinees alone in an instant. Yokumiru is so shocked by this feat that he wakes up from his drowsiness.[5]

In the end, Yokumiru shows the examinees their results and gives those who failed the second phase another chance at getting their Provisional Hero Licenses.

In need of forming heroes as soon as possible due to the increase in villainous activity, the commission creates the Hero Work Recommendation Project. Yokumiru is in charge of informing the U.A. High School of this new program, meeting with Nezu and Toshinori Yagi.[6]

While the heroes carried out a raid on the Paranormal Liberation Front, Yokumiru Mera is in the Hero Public Safety Commission main building to participate in a meeting with Rikiya Yotsubashi. The Commission has always been an eye on him since Deika incident, being aware of his affiliation to the PLF. Rikiya accepted the invitation, but the one who met them was not him but a double of his, and uses it as an opportunity for a surprise attack on the building, killing and injuring several members and heroes before dissolving away from his injuries.

Yokumiru is one of those who ended up injured. He protected the president who had been left unconscious due to the unexpected attack.[7]