My Hero Academia Wiki
Register
Don't have an account?
Sign In
Advertisement
in: Characters, Transgender, Transformers,
and 10 more
English

Plus Ultra, right? Then show me that Ultra!
Yawara Chatora to Izuku Midoriya in "Day Two"

Yawara is a tall, muscular man with short brown hair and a small triangle shaped beard. He has blank white eyes with black markings surrounding them. Tiger wears a brown version of the Pussycats' hero costume. 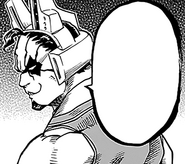 Tiger in the manga.

Yawara is a very macho, strict, and intimidating man who almost always has a fear-inducing aura surrounding him. At the same time, he maintains the same level of goofy eccentricity as his teammates.

Tiger appears to take the duty of training for U.A. High students very seriously. Almost everyone he encountered among the students was immediately intimidated by his presence. He is unafraid to push his students, even inviting them to break their muscles so they can grow back stronger. He does not tolerate any slacking off, and is willing to physically punish students who are not "Plus Ultra".[1]

Tiger also has a caring side, being very adamant about protecting both his students and teammates. He became enraged at the sight of Pixie-Bob's assault at the hands of Magne.[4]

Enhanced Strength: Yawara has enhanced physical strength. While it is unknown precisely how strong he is, he was strong enough to apprehend and defeat the notorious Magne and easily knock back Izuku Midoriya using 5% of One For All.

Pliabody (, Nantai?, literally meaning "Soft Body"): Yawara's Quirk allows him to stretch, flatten, and bend his body in ways that would normally be impossible.[5]

Català Polski
*Disclosure: Some of the links above are affiliate links, meaning, at no additional cost to you, Fandom will earn a commission if you click through and make a purchase. Community content is available under CC-BY-SA unless otherwise noted.
Advertisement