The Wild, Wild Pussycats (ワイルドワイルドプッシーキャッツ, Wairudo Wairudo Pusshīkyattsu?) or more simply known as the Pussycats are a cat-themed team of Pro Heroes.

The Wild, Wild Pussycats are one of the four hero teams that founded the Union Affairs Office. They specialize in mountain rescue operations and are veterans in their respective field. They even own their own large forested mountain. The Pussycats have twelve years of rescuing experience and expertise.[2]

Each member of the Pussycats wears their own colored version of the same hero costume. It consists of a sleeveless, collared top decorated with three straps and a bell, a large ruffled skirt, a tail, an orange belt with pockets, a silver buckle resembling a cat paw with blue pads, large white cat gloves with retractable claws, boots with vertical stripes lined with white fur and communication devices designed to resemble cat ears.

The Pussycats are considered a highly talented group of Pro Heroes. Each one is credited by having saved countless lives in mountain rescue missions. Their particular Quirks and experience as heroes made them the perfect choice for training tens of young hero students with various unique Quirks all at the same time.[3]

Over two years ago, the Wild, Wild Pussycats took in Kota Izumi, the orphan son of a cousin of Shino, who died fighting a villain.

On the occasion of Captain Celebrity's return to the United States, Makoto Tsukauchi decides to organize a farewell show at the Tokyo Sky Egg, inviting several of Japan's most famous heroes to participate, including the Wild Wild Pussycats.[4]

The team performs a choreography on the show when,[5] suddenly, the Tokyo Sky Egg is attacked by creatures known as Bombers, sent there by the villain, Number 6, to assassinate Captain Celebrity.[6]

The Pussycats remain to help and remain calm among the spectators while other heroes come out to face the creatures,[7] until they are defeated and Number 6 is forced to retreat.[8][9]

The U.A. High School contacts the Pussycats so their first-year hero students can train their Quirks on their private property in the mountainous area named as The Beast's Forest. Since there are many students, the Pussycats also help Shota Aizawa and Sekijiro Kan to train the students.[10]

Due the last incidents with villains, to avoid any possible threat, this contact had been kept in absolute secrecy, but somehow this information was leaked to the League of Villains. In this way, while on the night of the third day. The Pussycats organize a test of courage exercise between class 1-A and 1-B. However, that night the Vanguard Action Squad also attacks the camp with the goal of kidnapping Katsuki Bakugo.

The villain Mustard knocks most students unconscious with his Quirk Gas, Pixie-Bob is knocked out by surprise by the villain Magne, and Ragdoll is attacked by a Nomu. Mandalay and Tiger are the only ones left of the team to defend the students from the attack, although Shota Aizawa and some students also participate in the defense. In the end, even though some of the criminals were defeated and captured, the League of Villains manages to kidnap Katsuki.

During the aftermath of the Vanguard Action Squad Invasion it is discovered that Tomoko has also been kidnapped.[11]

Tiger along with Mt. Lady, Best Jeanist, and Gang Orca raid a warehouse that the League of Villains uses to create Nomu. Tiger rescues his partner Ragdoll, but finds that she is unresponsive. Suddenly, All For One appears in the shadows and apologizes to Tiger, explaining that he stole Ragdoll's Quirk. With a simple air blast, All For One defeats all the heroes, although Best Jeanist manages to push them all away in time with his Fiber Master, causing Tiger to be reeled back, allowing him to survive All For One's attack.

However, Yawara is still heavily injured by the attack.[13] While Edgeshot and Endeavor assist All Might, Yawara rescues the trapped civilian whom All Might was protecting in order to alleviate his burden.[14]

After All Might defeats All For One, Tiger returns home with Ragdoll. When Ragdoll regains consciousness, her teammates comfort her as she cries over her stolen Quirk and the end of her career as a hero.[15] The team enters a period of inactivity.

They receives a message from Tartarus regarding Ragdoll's stolen Quirk by All For One, in which they are informed that the villain cannot transfer the Quirk he stole back to its original user. It is being investigated to uncover the Quirks he has taken.

Due to the hiatus, the Pussycats dropped from 32nd to 411th on the Hero Billboard Chart JP. Despite the huge drop, the Pussycats considers that being in the three digits despite zero action means that there are many fans who want to see them back in action, so they decide coming off their hiatus and return to hero work. Despite being Quirkless, Ragdoll decides to happily support her team from their agency as an office lady of sorts.

The Wild, Wild Pussycats go to the U.A. High School to visit Classes 1-A and 1-B students, and communicate their return to work as heroes.[16]

Next year, by the end of March, while Tomoko stays in their Hero Office,[17] Mandalay, Pixie-Bob and Tiger participate in the Jaku Hospital Raid, being members of the team in charge of evacuating patients, visitors and hospital staff from the building, while the other team is in charge of capturing Dr. Garaki.[18]

However, Tomura unleashes a Wave of Decay that destroys the entire building, killing dozens of heroes. The destructive wave does not stop and continues spreading. Mandalay, Pixie-Bob, and Tiger flee the wave of destruction. Trying to hold it back, Pixie-Bob uses her Quirk on it but it doesn't work and the decay reaches the city.[19]

Pixie-Bob manages to escape the decay, and later she helps other heroes to try to prevent Tomura, a few of his allies and several Nomu from escaping the battlefield, but they do not succeed.[20]

The Wild, Wild Pussycats (half version). 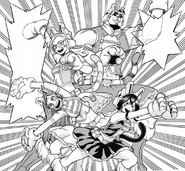 The Wild, Wild Pussycats in the manga. 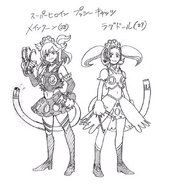