With All Might in retirement, Endeavor takes up the mantle of the number one hero, a position he’s coveted for years. But now that he has it, he’s not entirely comfortable with the responsibilities and risks that come with it—both heroes and villains are always gunning for number one. What does the future hold for Midoriya, and what do his dreams about One For All mean? 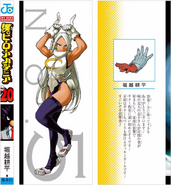 Retrieved from "https://myheroacademia.fandom.com/wiki/Volume_20?oldid=191973"
*Disclosure: Some of the links above are affiliate links, meaning, at no additional cost to you, Fandom will earn a commission if you click through and make a purchase. Community content is available under CC-BY-SA unless otherwise noted.
FandomShop DC Trivia GalaxyQuest