The background of the colored cover is yellow, and the title logo is white with a shade of red. The author's name is printed in black.

On the spine, Izuku is featured, this time on his U.A. uniform, also on a yellow background. The volume illustration features Izuku, Katsuki Bakugo, Ochaco Uraraka and Tenya Ida walking through U.A.'s front gates. The back cover depicts Mt. Lady posing for a shampoo commercial, and Kamui Woods being featured in an anti-littering commercial.

Middle school student Izuku Midoriya wants to be a hero more than anything, but he hasn’t got an ounce of power in him. With no chance of ever getting into the prestigious U.A. High School for budding heroes, his life is looking more and more like a dead end. Then an encounter with All Might, the greatest hero of them all, gives him a chance to change his destiny…

Afterword thanking the reader for getting volume 1. 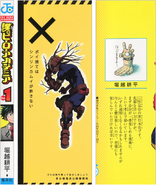