< U.A. Sports Festival
View source
watch 02:56
Doctor Strange in The Multiverse o Madness - The Loop
Do you like this video?
Play Sound

The First Year Stage of the U.A. Sports Festival (雄英体育祭一年ステージ, Yūei Taiikusai Ichi-nen Sutēji?) is a nationally televised competition where first year students can showcase their abilities in order to get scouted by Pro Heroes.

Following the U.S.J. Incident, U.A. High decided to go along with their annual Sports Festival despite the attack. The festival was deemed too important to cancel, and increased security measures were taken to ensure the safety of the students.[1] First-year classes A-K participated in the First Year Stage of the festival.

Midnight was the chief referee for the entire festival. She explained the rules to each event and would decide on how to proceed when any unique situation would arise. All of the events are announced by Shota Aizawa and Present Mic. Present Mic did the majority of the commentating, with Shota inserting his opinion from time to time. Cementoss oversaw the finals. He would repair the stage after each fight and would stop the fights if they endangered student lives.

During the preliminary round, all eleven first-year classes raced along a four-kilometer-long obstacle course around the festival stadium. Participants were allowed to use their Quirks freely to try and win, as long as they do not leave the race course.[2] The first forty-two competitors that finish advanced to the second event.

The first obstacle of the race was 'Robo Inferno": a blockade of villain robots from the U.A. Entrance Exam.[3] The second obstacle was "The Fall": a canyon that must be trekked across by walking along tightropes. Students who fell were automatically eliminated. The third and final leg of the course was a Mine Field.[4]

In the second event, participants formed teams with a maximum of 4 people and then got in a horse configuration. The objective was to earn points by swiping other teams' headbands while protecting their own. The value of a team's headband would be the sum of the points each person on the team received based on their performance in the previous competition. The person who ranked last would be worth 5 points, and each rank above that would be worth 5 more points than the previous one, with the exception of 1st place, which was worth 10 million points.[5]

The one to wear the headband must be the rider, and they were not allowed to wear it below their neck. If the team lose their headband or crumble as a horse configuration, they would still not be eliminated. Participants were allowed to use their Quirks, but, should they attack with the malicious intention of harming another participant, they will be forced out of the game.[6]

After the cavalry battle, there is an interlude period where the students of the different classes and courses participate and compete in different recreational activities, such as a scavenger hunt and a ball race, among others.

These activities have no other purpose than to entertain the public and relax the atmosphere before the tournament. Meanwhile, the students qualified for the finals may choose whether or not to participate and use the opportunity to prepare themselves for the next event.[7]

Final Event: One on One Fighting Tournament

The final event was a tournament where participants competed against one another in one on one battles. The match-ups were decided by lottery.

Despite being part of the team that ranked third in the previous event, Mashirao Ojiro and Nirengeki Shoda resigned, so Ibara Shiozaki and Tetsutetsu Tetsutetsu took their places.

The conditions for winning a match were: knocking out the opponent, rendering them unable to move or getting them to step out of bounds/surrender. 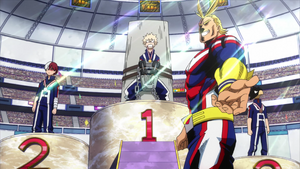