My Hero Academia Wiki
Register
Don't have an account?
Sign In
Advertisement
in: Locations, Schools, Hero Schools,
and 4 more
English

U.A. High School (, Yūei Kōkō?) is an academy that boasts the best heroics education in Japan. It sits atop a forested hill that overlooks Musutafu.

It is one of the primary settings in which the story takes place.

U.A. is the #1 ranked high school for heroics and is considered as the top Hero Academy in Japan. Students are separated based on their abilities into specific Departments and Classes - A, B, C, D, E, F, G, H, I, J, and K.

As stated by Shota Aizawa, U.A. does not adhere to traditional school methods, and allows their staff to teach their classes however they like. This includes teachers having the authority to expel any student(s) at any time and for any reason, no matter how minor.[1] Furthermore, students who are expelled can be re-enrolled, although the expulsion will still remain on their permanent records.[2]

U.A. is renowned for having trained and produced some of the best heroes in Japan, including All Might, Endeavor and Best Jeanist.[3] All of whom earned their way into the top 10 of Japan's Hero Rankings.

Once a year, U.A. holds a tournament called the U.A. Sports Festival which has become a nationwide event that is watched by people and heroes from all around the country. Students from all departments are allowed to participate, and it is a chance for heroes in training to appeal to Pro Heroes for possible internships or recruitment. It is also the opportunity for other students to gain admittance into the Hero Course, as well as for students from the Support and Business courses to promote their support items and products respectively, and further develop their business sense.

U.A. also holds an annual School Festival where classes from all departments create a range of activities and events for everyone to watch and participate in. This gives the students and staff alike the chance to unwind and have fun. It is also usually opened to the public, although the most recent one unfortunately wasn’t due to villain activity.

U.A. was originally a day school, but it was later turned into a boarding school.

U.A. executes a six-day school week where the only day off is Sunday.[4]

At the entrance, there is a security wall nicknamed the "U.A. Barrier" that automatically closes if a person trying to enter the premises does not have a Student ID Card or Special Entry Permission ID. Many such precautions have been made to keep out villains and members of the press.

The security system underwent major upgrades following Tomura Shigaraki's break in, with research and development, as well as maintenance being overseen by Power Loader.[5] The grounds are partitioned like a game board and each section is equipped with a mechanism that will transform it into an underground emergency shelter. Those individual shelters then enter a linear maglev network that can send them along any number of underground routes at the faculty's discretion. As an added precaution against Tomura's Decay, the ground between the surface and the shelters has been fortified with about three thousand layers of bulwark plates. Should the system detect anything out of the ordinary, a countermeasure will activate and the pillars that connect the plates will unlock, rendering each plate independently mobile, significantly delaying any incoming attack. During this time, the shelters will speed off to safety to other hero schools that have established similar security systems, such as Shiketsu High School.[6]

Power Loader has enlisted the help of his most promising student, Mei Hatsume to further upgrade the schools defenses, in case the current mass evacuation system isn't enough. Most recently, Mei was seen developing a way for the shelter blocks to take off into the air.[5]

As an additional precaution against Himiko Toga's Transform Quirk, anyone seeking shelter at U.A. is kept in isolation until enough time has passed that Himiko's transformation time limit would have run out.

The U.A. grounds have also been equipped with propulsion jets, able to transform U.A. into a floating fortress.[7] In preparation for the final battle with Tomura Shigaraki, special measures were put in place to counter his abilities. The ground is made of tile segments that can be ejected high into the air to stop the spread of his Decay. The tile segments can be replaced as they go. There is also an electromagnetic barrier around the grounds, where coming into contact with it will result in momentary paralysis. The whole thing is powered by several students with electrical Quirks.[8]

The U.A. Barrier in full effect. 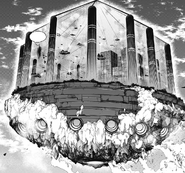 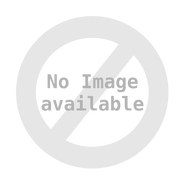 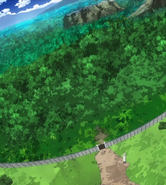 Japanese, math, science, and foreign languages, among other subjects, are all compulsory subjects. Students in every department study these core subjects and will change year by year.[4]

Students learn everything they need to know to become excellent heroes in service of the community and work towards the qualifications necessary to be allowed to use their Quirks in public spaces. They are trained in battle, first aid, and all manner of heroics-related lessons.[4] Ordinary subjects, such as English, take place in the morning, followed by lunch. Then, in the afternoon, Heroics classes take place.[11]

These students belong to Classes A and B.

Department of Heroes - Class 1-A.

Department of Heroes - Class 1-B.

Department of Heroes - Class 2-A.

These students belong to Classes C, D, and E.

Students in this department focus on developing support equipment that help heroes out on the battlefield. With a workspace stocked to the brim with all sorts of executive tools, the department provides an unmatched creative environment.

These students belong to Classes F, G, and H.

This department focuses on all aspects of heroic business, from founding and managing hero agencies to executive producing heroes. They even do hands-on lessons in venture capitalism.

Theses students belong to Classes I, J, and K.

The lessons themselves depend on the department but the general daily schedule (for students not enrolled in the Hero Course) is as follows:[4]

The U.A. P.E. uniform is a pair of dark blue pants with white vertical lines going up the legs and a dark blue short sleeve shirt with white lines that form the letters 'U' and 'A'. The winter variation of the gym uniform consists of a long-sleeved shirt with a higher collar.

While U.A. students are required to wear this uniform, it seems the faculty is lax about enforcing students to wear the uniform properly; Katsuki Bakugo wears his uniform with the top buttons undone, no tie, and his pants sagging. Izuku Midoriya wears his tie not tied properly. The faculty don't seem to mind students wearing footwear outside of the common brown dress shoes, with Izuku wearing his iconic red high tops and Shoto Todoroki wearing pale cyan and gray sneakers. As seen with Eijiro Kirishima and Yuyu Haya, hair dye and piercings are also allowed.

Deutsch Español Français 한국어 Polski Português do Brasil Русский
*Disclosure: Some of the links above are affiliate links, meaning, at no additional cost to you, Fandom will earn a commission if you click through and make a purchase. Community content is available under CC-BY-SA unless otherwise noted.
Advertisement