Tsunagu is a tall man with dark eyes and blonde hair combed into a side-part. In his hero costume, the majority of Tsunagu's body is clad in denim. He has the waist of jeans shaped into a cylinder to covers his mouth and a jean jacket with sleeves. He finishes his outfit with a pair of jeans and brown boots. 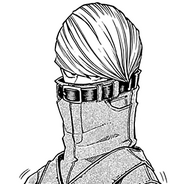 Tsunagu is an elegant man with flamboyant tendencies. He believes very strongly that people with influence maintain a positive appearance both physically and socially. He admits to being unfond of brutish individuals like Katsuki, and took him on to try to fix his attitude.

He's also very selfless and brave, as he did not hesitate to take the full brunt of All For One's attack to save his allies, something the latter praised him for.

Best Jeanist is first mentioned among other U.A. High School alumni: All Might and Endeavor.[2]

When Katsuki Bakugo chooses him for an internship, Tsunagu introduces himself by admitting he does not like Katsuki very much. Irritated, Katsuki replies that Best Jeanist sent the offer to him. Tsunagu says all his other recruits were well behaved unlike him.[3] Although Tsunagu admits that Katsuki is an outstanding talent, he says the young man still needs to be taught how to display himself as a hero. Irritated Katsuki approaches Tsunagu, forcing him to discipline Katsuki by using his Quirk to wrap him in denim.[4]

The next day, Tsunagu tries to teach Katsuki the value of maintaining an elegant outward appearance. Best Jeanist styles Katsuki's hair similarly to his own, but it returns to its messy form shortly after.[5]

After Hero Killer: Stain's defeat is published, Best Jeanist reminds Katsuki and all his sidekicks to remain calm and operate as they normally would.[6] Later on, Tsunagu takes Katsuki on patrol. He asks Katsuki why patrols are important, to which his intern answers is because they can beat up criminals on sight. Tsunagu says this answer is wrong, and that patrols help heroes maintain a strong public image. Katsuki ends up getting into a spat with young children, making Tsunagu about Katsuki's pride.[7]

After Katsuki is captured by the League of Villains' Vanguard Action Squad, Tsunagu is enlisted to help in the rescue operation to save Katsuki. Best Jeanist, Endeavor, Edgeshot, and All Might are present and ready to begin the strategy meeting.[8] Before the infiltration begins, Best Jeanist mulls over his inability to help change Katsuki's attitude and attributes it to his pride.[9]

Mt. Lady destroys the front of the warehouse and she, Tiger, Best Jeanist, and Gang Orca infiltrate the partially destroyed warehouse and apprehend all the Nomus while Tora rescues Ragdoll. Best Jeanist notes that the warehouse has been cleared.[9] Best Jeanist orders the Police Force to come in and hold position in case there are more Nomus around. Suddenly, All For One appears and reveals that he stole Ragdoll's Quirk. Best Jeanist restrains the villain with his Quirk, but before he can act further, the warehouse is completely destroyed and the surrounding area suffers damage.[10]

The Hero Billboard Chart JP, a chart that tabulates the rankings of pro heroes in Japan twice per year, announces the headlines; Best Jeanist, the No. 4 Hero, survived the Kamino Ward incident and is taking a rest from his duties as a Hero for an extended amount of time.[13]

Fiber Master (ファイバーマスター, Faibā Masutā?): Tsunagu can manipulate fibers at will as long as the person is wearing clothes. He can unravel a part of his clothes into fabric strings and can use them to restrain targets, as shown when he apprehends the League of Villains' Nomus. This Quirk works better on denim rather than sweats.[14] This is a powerful ability that catches most off guard. He can manipulate his threads to move very fast, far, thin enough to be nearly invisible, and strong enough to easily bind even Nomus. It is a prime example of a restraint type ability.

Tsunagu's stats, according to the Ultra Archive Book

Retrieved from "https://myheroacademia.fandom.com/wiki/Tsunagu_Hakamada?oldid=104407"
*Disclosure: Some of the links above are affiliate links, meaning, at no additional cost to you, Fandom will earn a commission if you click through and make a purchase. Community content is available under CC-BY-SA unless otherwise noted.