My Hero Academia Wiki
Register
Don't have an account?
Sign In
in: Characters, Males, Heroes,
and 7 more
English

Back to page
View source 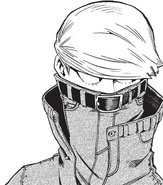 Best Jeanist was an elegant man with flamboyant tendencies. He believes very strongly that people with influence must maintain a positive appearance both physically and socially. Best Jeanist often uses metaphors referencing jeans, denim, and various other sewing and fabric based phrases, often inspiring his recruits with speeches, telling them to keep their life straight like their jeans. [3]

Best Jeanist takes the role of being a hero very seriously. He was selfless, brave, and charismatic, and aims to spread a sense of a peace to all people and believes heroes don't make excuses. He did not hesitate to take the full brunt of All For One's attack to save his allies, something the latter later praised him for.[6]

As he is ranked very highly, Best Jeanist is an immensely powerful hero, which has been proven in his fight against the League of Villains. Best Jeanist was not only successful at restraining multiple low-end and mid-end Nomu, some of which were defeated by his comrades Mt. Lady and Gang Orca, but he was capable of swiftly immobilizing the incredibly powerful All For One. However, the latter case was temporary, as the Symbol of Evil broke free from Best Jeanist's restraints and defeated the Hideout Raid Team.

Fiber Master (ファイバーマスター, Faibā Masutā?): Tsunagu's Quirk allows him to freely manipulate the threads in any nearby piece of fabric. His Quirk works best with denim, and least effective on sweats.

He can unravel a part of his own clothing into strings and use them to restrain targets, as well as use the targets own clothing against them.

Polski
*Disclosure: Some of the links above are affiliate links, meaning, at no additional cost to you, Fandom will earn a commission if you click through and make a purchase. Community content is available under CC-BY-SA unless otherwise noted.
FandomShop Newsletter Join Fan Lab