My Hero Academia Wiki
Register
Don't have an account?
Sign In
Advertisement
in: Characters, Males, Heroes,
and 9 more
English

Heroes and villains are two sides of the same coin... I can see it in that glare of yours. So what is it that really makes someone a hero?
Tsunagu Hakamada to Katsuki Bakugo in "Getting the Knack"

Tsunagu Hakamada (, Hakamada Tsunagu?),[1] also known as Fiber Hero: Best Jeanist (ファイバーヒーロー ベストジー二スト, Faibā Hīrō Besuto Jīnisuto?), is the former No. 4, and the current No. 3 Pro Hero, as well as the recipient of the "Best Jeanist" award for eight consecutive years.[2]

Tsunagu is a tall, slim man with an unnaturally long and flexible neck, as shown on several occasions, and dark, heavily-lashed eyes which appeared to tilt slightly inwards. He has rather long blond hair which he wears combed drastically to the left, covering his left eye.

During the Paranormal Liberation War Arc, after making his return to duty he now wears a darker toned version of his previous costume. In addition he wears a new belt with his hero name initials and new boots. 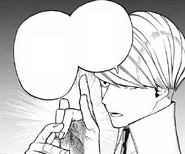 Tsunagu is an elegant man with flamboyant tendencies. He believes very strongly that people with influence must maintain a positive appearance both physically and socially. Tsunagu often uses metaphors referencing jeans, denim, and various other sewing and fabric based phrases, often inspiring his recruits with speeches, telling them to keep their life straight like their jeans.[3]

Tsunagu admits to being unfond of brutish individuals like Katsuki Bakugo.[4] He took Katsuki on to try to fix his attitude only to be frustrated by the young man's stubbornness.[5]

Tsunagu takes the role of being a hero very seriously. He is selfless, brave, and charismatic, and aims to spread a sense of a peace to all people and believes that no matter how dire a situation may be, a real hero doesn't believe in making excuses. He did not hesitate to take the full brunt of All For One's attack to save his allies, something the latter praised him for.[6]

Overall Abilities: Tsunagu was ranked 4th of Japan's heroes, before taking the spot of No. 3 after All Might's retirement. He also possesses a proficient handle on his powerful Quirk, Fiber Master. Tsunagu can unravel part of his clothes into fabric strings and manipulate them in order to restrain targets.[7] Since his hero costume is covered from head to toe with denim, his Quirk specialty, he always has a source of easily controllable fibers for him to weaponize at his disposal. Another known application includes manipulating fibers of clothes worn by allies for forced evasive maneuvers.

As he is ranked highly, Tsunagu is a very powerful hero, which has been proven in his fight against the League of Villains. During the Kamino Incident, Tsunagu was not only successful at restraining multiple Nomu, some of which were defeated by his comrades Mt. Lady and Gang Orca, but he was capable of swiftly immobilizing the incredibly powerful All For One. However, the latter case was temporary, as the Symbol of Evil broke free from Tsunagu's restraints and defeated the trio of Hideout Raid Team members, although denim-clad hero got his comrades to safety, leaving three Pro Heroes with moderate injuries. Despite being overpowered, Tsunagu had the mettle to continue fighting, and attempted to constrain All For One again, but the masked villain swiftly dealt a grievous injury to the fabrikinetic, taking the hero out of the battle entirely.

After months of convalescence, Tsunagu finally resumed his hero work and made his surprise comeback during the climax of the Paranormal Liberation War. Immediately upon arriving on the battlefield in Jaku City, Tsunagu used additional fiber wire support items to detain Tomura Shigaraki, Dabi, Mr. Compress, Spinner, Skeptic, and Gigantomachia, all of which are powerful villains. Being able to restrict Gigantomachia is an exceptionally impressive feat on Tsunagu's part, as the behemoth possesses immeasurable strength, and thus is virtually impossible to subdue. Whilst binding the six Paranormal Liberation Front members, Tsunagu displayed nigh-severe coughing, and told himself not to falter. This is revealed to be because he was put in a death-like state with a medical procedure for several months in order to fool Dabi into thinking he'd been killed; because of the procedure and the months spent in a comatose state, his body was severely weakened.

Skilled Youth Counselor: Gang Orca was surprised to find out that Tsunagu was unable to reform Katsuki's brutish behavior. This implies that the denim-wearing hero has a good record of reforming troubled youths.

Fiber Master (ファイバーマスター, Faibā Masutā?): Tsunagu's Quirk allows him to freely manipulate the threads in any nearby piece of fabric. His Quirk works best with denim, and is least effective on sweats.

He can unravel a part of his own clothing into strings and use them to restrain his targets, as well as use the target's own clothing against them.

Denim Hero Costume: Best Jeanist wears a costume made completely out of denim, giving him ready access to the material his Quirk works best with.

Industrial Strength Fiber Cables: Best Jeanist can use such cables to restrain incredibly strong enemies who cannot be restrained be regular threads. So far, he has only been seen using these cables against Gigantomachia.