Episode 68
Trigger (トリガー, Torigā?) is a type of drug that gives a boost to an individual's Quirk, simultaneously weakening their sense of reason.

Trigger is a drug used to enhance the power of the Quirks. Because it is distributed and used by villainous criminal organizations, the drug is illegal in many countries.[1]. Due to its Quirk-boosting effects, it's also called Boost.[2] There is a legal variant of Trigger, used to stop baldness and erectile dysfunction, although it is illegal to sell it without a license to sell pharmaceuticals.[3]

Trigger is distributed in pre-filled syringes that are usually injected through the neck. Trigger is produced in different regions of the world, so its quality can vary from one place to another. Those produced in Asia are usually of poor quality and their effects only last a few minutes, while the Trigger produced in America can last an hour or two.[1]

With the proper uppers mixed in, there can be obtained an even more powerful, but also more dangerous, variant known as Ideo Trigger.[4][5] Like the regular Trigger, this variant also empowers the Quirk but it causes whoever takes it to go on an uncontrollable rampage while enhancing their Quirk, in addition to undergoing a remarkable physical transformation. Ideo Trigger addicts suffer a side-effect after the use that changes their tongues' color to black.[6]

Generally, Ideo Trigger is injected into the body, but it has been possible to develop a variant that only needs to be ingested to work. Although it's less effective than the other form, it lacks the psychotropic element and doesn't cause the user to go berserk or lose their sense of reason.[7]

Ideo Trigger can also come in a gaseous form. This gas has been chemically altered for the specific purpose of making all Quirk-users who breathe it to lose control of their Quirks to the point of making them very dangerous and destructive to both themselves and their surroundings.[8]

Originally, Trigger was created to massively enhance the power and potency of weak Quirks. However it was soon used for criminal activities, so it was banned in many countries, including Japan, becoming an illegal product with which gangsters and drug dealers around the world traffic.[1]

In Japan, criminal mastermind All For One, as part of an organization known as the Villain Factory by the police force, shows a special interest in the effects caused by Trigger, having helped to create a new variation of the drug known as Ideo Trigger. This version causes its consumers to turn into Instant Villains and go on a rampage. He first utilizes this form of Trigger secretly behind the scenes of the Underground Masquerade, enticing fighters with a concentrated dose of the drug to help them perform better in fights, and then using the Ideo Trigger to gas the Masquerade, exposing and causing the fighter's Quirks to go out of control, and allowing him to steal the ones that most interest him.[9]

Several years later, the Villain Factory returns, deploying several agents onto the streets of Naruhata, distributing the drug between junkies and thugs, which causes many problems, allowing them to collect all the data to study, as well as blood samples from the consumers. Any Trigger users that most interest them are abducted and turned into Next-Level Villains, altering and enhancing their bodies to make them able to withstand massive amounts of Trigger. This leaves them drastically and indefinitely altered from the dosages.

In order to obtain funds for their experiments, the Shie Hassaikai engages in trafficking with this drug with other criminal organizations.

Months later, a factory that illegally produced this drug was destroyed, although the manufactured product had disappeared. A few days later, a trio of smugglers try to transport the drugs by sea to deliver it to their client, Flect Turn, but are intercepted by the Oki Mariner Crew, so one of them injects a dose of Trigger to power up his Quirk and generate a dense smokescreen to escape and hide in the Verize islands.

Due to the danger posed by the Trigger and the fact that it is difficult to search for someone in the archipelago, Selkie enlists Ryukyu and her team for help. Together they go in search of the smugglers and this time they manage to catch them and confiscate the large drug shipments.[2]

Unbeknownst to them at the time, the smugglers were working for the international cult, Humarise, and had already acquired enough Ideo Trigger for their plans. With the help of several scientists which they forced into assisting, Humarise created Trigger Bombs, which contain a massive amount of gaseous Ideo Trigger which, when unleashed, causes whoever inhales it to completely lose control of their Quirk to the point of overload and death. They plan to use the gas to infect major cities all over the world, killing most of the Quirk population, thus preventing the Quirk Singularity and saving humanity.

Pro Heroes are deployed all around the world to stop Humarise and Trigger's threat, and thanks to a deactivation key created by one of the scientists, Eddie Soul, Izuku Midoriya and the scientist's son, Rody Soul, manage to shut down the master Trigger Bomb, halting the activation, while the Pro Heroes find and dispose of the Bombs themselves.[8] 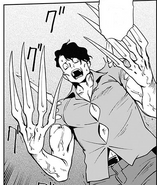 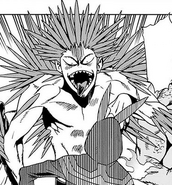