My Hero Academia Wiki
Register
Don't have an account?
Sign In
Advertisement
in: Quirks, Transformation Quirks, Villain Quirks,
and 3 more

All For One (Formerly)
Hood

Transforming Arms (する, Hen'yō Suru Ude?)[1] is one of the Quirks used by Hood, as well as All For One, who stole it from an unknown person.

Transforming Arms allows its user to shape-shift their arms, allowing Hood to have long-ranged, elastic attacks. The user can also split their arms apart to surround their target and launch multiple attacks at once.[1]

Depending on the user's fighting style, it may not be compatible with the intentions of the Quirk. For Hood, since he preferred to use his martial arts skills for close-combat brawling, it conflicted with the shape-shifting abilities. O'Clock was able to recognize this during their fight, as it resulted in his wind-up attacks having a bit of a lag, which he was able to take advantage of.[2]

Hood utilizes this Quirk, pre-High-End, during his battle against O'Clock, Kendo Rappa, and Rumi Usagiyama during the Underground Masquerade. He uses this power to stretch out his arms and legs to either attempt to grab or snatch his opponents out of the way, as well as increasing the size of his fists for larger, stronger attacks, and to give him the strength to grab near-by objects to attack with. All For One had recently just given him the Quirk, believing it to be of use to his array of abilities, though lamented how incompatible it was to his preferred fighting style.[3]

As a High-End Nomu, Hood uses this Quirk in combination with his Shoulder-Mounted Jets to fly at high speeds; transforming his arms into wings and using his boosters to accelerate himself.[4] 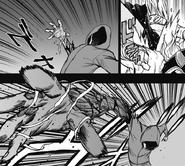 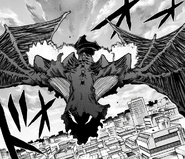