Mashirao gets in close to his target and swiftly spins his tail around in a circle to strike anything in the vicinity.[1]

He first used this technique to destroy several of Pony Tsunotori's remote-controlled horns during the Joint Training Battle.[1]

Mashirao later uses this Super Move against Chimera and Nine when they invaded Nabu Island,[2] and would go on to use it again during Class 1-A's fight against Izuku Midoriya.[3] 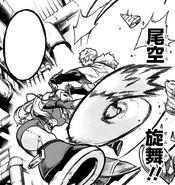 Tornado Tail Dance in the manga.