I'm in Class 1-B of the Hero Course! If I don't stand up here, what's the point?! I'm gonna find these jerks and beat the snot out of them!
Tetsutetsu Tetsutetsu to Itsuka Kendo in "Smoke Signal"

Tetsutetsu is a young man with quite long, chin length, messy gray hair which is rather peculiar in that it never seems to change shape, and black eyes which are tilted dramatically inwards, each lined with a very thick, jagged, tan-colored substance, which are presumably his eyelashes. He doesn’t appear to have any notable eyebrows, and, like Eijiro Kirishima, he has rows of sharp, pointed teeth.

His hero costume consists of a dark green jumpsuit, cut off just below his chest, with some small, silver-rimmed holes in the lower section of his baggy pants and black boots with metal soles, heels, and front plating. He has steel straps over his shoulders and under his arms, made up of multiple pieces, which connect at a red oval in the center of his chest, with two thinner bands around his biceps and a small plate on either side of his waist. He wears a metal jaw-guard around his face, similar to the one Eijiro wears, just thicker and not connected over his nose or around his chin, with the letters "Fe" (which stands for iron in the periodic table) stamped on a plate on each side of his face. 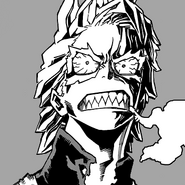 Tetsutetsu is defined by his very hot-headed and outspoken personality. He is confident, stubborn, and very straightforward in his motivations and actions. He tends to be very vocal about his intentions and has a one-track mind, often looking for the simplest solution to problems in order to solve them in the most direct manner. During battles, Tetsutetsu's direct personality shows through his tenacious and upfront fighting style.

Determined to prove himself, Tetsutetsu desires to be put on the same skill level as the students of Class 1-A. When Tetsutetsu first met Class 1-A, he was very loud and abrupt in his introduction because he felt they considered themselves superior to Class 1-B. He especially detested Katsuki Bakugo for his arrogance and resolved to win the Sports Festival as a result.

Despite his stubbornness, Tetsutetsu eventually befriended Eijiro of Class 1-A and even cheered for him during the festival. Even so, Tetsutetsu continues to try proving himself as a student on par with Class 1-A.

Following the end of the first term, the Class 1-B students were considered second-rate by everyone including their homeroom teacher. Tetsutetsu was brought to tears while apologizing for disappointing his teacher. When villains attacked both classes, Tetsutetsu fought back as an opportunity to expose himself to danger and grow from it. Much like Class 1-A did during the attack on the Unforeseen Simulation Joint.

Tetsutetsu appears to care deeply about his peers. He didn't attack the villains before ensuring Ibara Shiozaki's safety and didn't hesitate to throw himself in front of a bullet for Itsuka Kendo.

Overall Abilities: Tetsutetsu has proven himself to be a very formidable individual on numerous occasions. His abilities earned him 8th place in the U.A. Entrance Exam, having the fourth-highest amount of villain points. Thanks to his Quirk, Tetsutetsu's fighting style is straightforward and reckless, letting his hardened body take opposing hits while delivering counterattacks. As even bullets cannot pierce his skin when his Quirk is active, Tetsutetsu is capable of turning himself into a human shield for allies or defenseless civilians.

Tetsutetsu has shown to be as formidable as Eijiro Kirishima, and due to their similar Quirks and fighting styles, the two were evenly matched during their battle at the U.A. Sports Festival, which resulted in a draw. The two hard-headed students were still on par with each other during their arm wrestling tie-breaker, until Tetsutetsu's Quirk began to weaken due to insufficient iron intake. Another testament of Tetsutetsu's prowess is when he, alongside Itsuka Kendo, took on the villain Mustard, a member of the League of Villains' Vanguard Action Squad. When the bout commenced, Tetsutetsu had some difficulty contending with the villain due to Mustard's marksmanship and the poisonous Gas enabling Mustard to read movements, all while Tetsutetsu began to suffer from the iron fatigue that comes form overusing his Steel Quirk. After a prolonged battle, however, Itsuka stepped in to blindside the masked perpetrator and dispel the toxic vapor, allowing a weakened Tetsutetsu to finally defeat Mustard with a single punch.

During the third round of the Joint Training Battle, Tetsutetsu displayed drastic improvement. The collaboration attack between him and Pony Tsunotori, allowed Tetsutetsu to take Shoto Todoroki by surprise, briefly pin him down, and force the pyro-cryokinetic into a one-on-one confrontation with the metal fighter. Tetsutetsu was able to easily counter Shoto's fire and ice attacks, bring him into close range, and use his brute strength to overpower the recommended student. The steel-transformed hero was still capable of pressuring his opponent even as Shoto was forced to raise his flames to their maximum output, putting Tetsutetsu's metal skin at risk of melting. The power struggle between the Quirk-strained students was brought to an abrupt end with the intervention of their respective teammates, Juzo Honenuki and Tenya Ida. In a last-ditch effort to defeat the Class 1-A opponents, the two Class 1-B classmates toppled over a large, partially liquefied tower, resulting in all 4 of the contenders being knocked unconscious.

Tactical Intellect: In spite of his hot-blooded personality, Tetsutetsu is a rather keen and observative individual. When he and Itsuka encountered Mustard, Tetsutetsu was able to correctly deduce, from the latter's school uniform, that the villain was in the same age range as the U.A. students. During the third round of the Joint Training, Tetsutetsu knew that his Steel Quirk will be an effective counter to Shoto's Half-Cold Half-Hot Quirk, so he brought the two opposing students into a battle of endurance, in which Tetsutetsu was confident he could defeat Shoto. When Shoto increased the intensity of his flames, Tetsutetsu surmised that the heterchromic was trying to force heat into his body.

Indomitable Will: Tetsutetsu possesses a selfless, heroic spirit that is more ironclad than his body. During the Vanguard Action Squad Invasion, Itsuka tried to remind Tetsutetsu that Mandalay told the U.A. students not to engage the invading villains, but the steel student starkly refused to retreat. Undaunted, Tetsutetsu voiced his resolve by reminding his classmate that they are supposed to be heroes, and it is their duty to fight back against criminals who threaten them. He also has a die-hard desire to protect his comrades, as shown when he instinctively took a bullet from Mustard that was meant for Itsuka. During the Joint Training Battle, wherein he faced Shoto Todoroki, Tetsutetsu's fighting spirit pushed him further to endure Shoto's overwhelming blaze and take on his adversary, no matter the risk to his metal form melting. Tetsutetsu then affirmed that if he can't put his life on the line in training, then he won't be able to do it in the real world, as high-ranked students and limits are there to be surpassed.

This power grants Tetsutetsu both augmented defensive abilities to withstand attacks, as well as the augmented strength of his unarmed physical attacks.

Upon losing an arm-wrestling match, he mentioned that he should have had more iron that morning, implying that his Quirk's strength is fueled and affected by his diet containing iron. If he uses his Quirk for too long, Tetsutetsu will suffer from iron fatigue, resulting in his metal form losing its durability. And while his steel skin has a resistance to heat, it will melt if the temperatures are high enough. In addition, due to his skin transforming into metal, Tetsutetsu is susceptible to magnetism.