My Hero Academia Wiki
Register
Don't have an account?
Sign In
Advertisement
in: Characters, Males, Civilians,
and 5 more
English

Three years I gave to this company, but today I'm taking it down. From as far back as I can remember, I've lived my life as a bootlicker. It's been suffocating. But today, my life comes to an end.
Teruo Hazukashi in "Endeavor and Hawks"

This article is about the minor villain from the Pro Hero Arc. For the My Hero Academia: Vigilantes character, see Teruo Unagisawa.

Teruo is an average-sized adult man, with brown, short, and spiky hair. During his attempt to destroy the company he worked for, he wore nothing except a long coat and kneesocks. 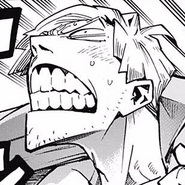 Teruo in the manga.

While not much is known about Teruo's personally, he does appear to hold some kind of grudge and resentment towards the company he has worked at for three years of his life, implying that he may have been treated unfairly or that he became fed up of serving under others. The latter's statement is likely true as he seems to view himself as a "bootlicker" and is dissatisfied with being such.

Teruo was inspired by Destro's autobiography on liberation, which is what inspired him to take action against his workplace.

While taking a stand, Teruo is also willing to humiliate himself in order to activate his Quirk and become stronger, which he does by stripping himself in the eyes of the commuting public. Although whatever he was planning next was quickly put a stop to by Hawks.

After complaining about working for his company for three years, Teruo plans to get revenge on them after being spurred on by a copy of Destro's autobiography. He strips himself down naked to trigger his Quirk, which increases his power as he becomes more embarrassed, before he could do anything more, however, he is quickly knocked out by a passing Hawks.[1]

Shame (, Shūchi?): Teruo's Quirk allows him to increase his power when he is embarrassed.

Teruo activates his Quirk by removing all his clothes and exhibiting himself to become extremely embarrassed by the populace.

The full extent of the Quirk has not been shown yet, as Teruo was quickly knocked out before he could activate it.[1]