Team Idaten is a Hero Agency run by Tensei Ida.

Team Idaten is a hero agency characterized by emphasizing teamwork. Its policy is gather the people with Quirks with a single strong point, and deploy the right people in the right places, then take on villains with perfect teamwork and coordination.

For that reason, Team Idaten is formed by dozens of sidekicks who work together. The agency highly values not only those on the front lines, but also patrollers, navigators, and all of the other support staff working for us behind the scenes.[1]

The first time Team Idaten is seen in action is when Ingenium tries to catch Bat Villain. After the villain escaped the first time, Ingenium retires to discuss with his team members a new strategy to capture him. Tensei and his team devise a strategy in which Tensei would lure the villain into a dead-end strip of the highway, with the rest of Team Idaten ready to apprehend the villain when he falls into their trap.

The next day, Ingenium chases Bat Villain again, but this time the rest of the Team Idaten participates by blocking the road on which he is fleeing. To his surprise, it is revealed that Bat Villain is not only a runner but also has wings, and flys away from there. Tensei's sidekicks try to capture him, but the villain dodges everyone and sneaks through the alleys of Naruhata. All in all, the villain does not get to far, as he is defeated and captured by the Naruhata Vigilantes, who tie him up and hand him over to the Team Idaten for his imprisonment.[1]

Days later, Enigma, the new team member, travels to Tokyo to visit Ingenium's office but she gets lost in Naruhata so she uses her Quirk to peer over the city, scaring the passers-by with her appearance, who mistake her for a villain. They are attacked by the guards, but after clarifying the situation, they apologize for the misunderstanding. As an apology, Koichi Haimawari offers to carry her to Ingenium's Hero Office.[2]

The Villain Kuin Hachisuka injects Trigger into a cat with a Quirk, causing him to merge with a bus full of people and goes out of control. On that bus was Koichi, along with his mother, Shoko Haimawari, and Makoto Tsukauchi. Ingenium is the first to arrive, tearing off the bus door and reassuring the passengers.

Then, the rest of the Idaten team arrives with a truck to rescue them, and Enigma grabs the passengers with her Quirk and puts them in the other vehicle. The actions of the Kuin causes the Cat-Bus to attack the truck, damaging it and leaving it incapacitated to continue the rescue operation, when Makoto is still on the bus.[3] Fortunately, Ingenium and The Crawler manage to rescue her.[4]

Months later, Tensei is invited to participate in Captain Celebrity's farewell party at Tokyo Sky Egg, and he decides to bring his whole team with him[5] to participates in Ingenium's acrobatics shows[6].

When the building is attacked by Bombers, Ingenium splits his team to help the heroes during the attack, either by assisting them in the fight against the villains or to keep the spectators calm and avoid panic.[7]

Several years later, the cunning activities of the villain Number 6 cause a series of incidents that end with Kazuho hospitalized after beign turner into the new host of Kuin Hashicuka, and the police station having suffered a bombing. Although not responsible, Naomasa knows that Koichi is related to these incidents, so he obtains an arrest warrant for "The Crawler".[8] To arrest him, Naomasa contacts several heroes, including Ingenium and his team Idaten.

Soga and his friends, now allies of Koichi, warn him of this so that he can hide. Team Idaten is deployed, [9] and it doesn't take Ingenium too long to catch up Koichi on the highway. The hero tries to convince him to collaborate with the police since he may be in danger, but Koichi tells Ingenium that he cannot do it until he is sure Pop is safe and try to evade him down an alley.

Ingenium had already foreseen this, so they had deployed their sidequiks through the alleys of Naruhata to corner him. Surrounded by members of Team Idaten, Koichi is able to escape them by blasting up into the sky. Ingenium notes that thanks to his new found versatility, he may be too much for them to handle, and leaves the job to someone else.[10]

Team Idaten is indirectly mentioned by Tenya Ida, who mentions that Tensei has dozens of sidekicks working alongside him on the team.[11] 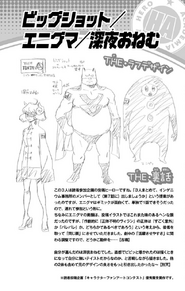