My Hero Academia Wiki
Register
Don't have an account?
Sign In
Advertisement
in: Males, Pro Heroes, Characters,
and 4 more

Takahiro (タカヒロ, Takahiro?) is a Pro Hero in My Hero Academia: Two Heroes.

Takahiro has a head like that of a bird's, with spiked feathers similar to those of Fumikage Tokoyami. He has feather-like ruffles around his neck that extend down to his chest, and he also has a large pair of wings that protrude from his back. Takahiro has bird-like claws for hands with long talons on each finger.

In his hero costume, he wears a set of headphones and a vest with a high popped collar, as well as a pair of baggy parachute pants with circles on the knees, and buttons going down to the crotch, the top two unbuttoned. His pants are held up with a belt with a large front buckle, and on his feet are plain boots. 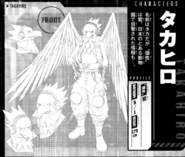 Not much is known about his personality at this time.

Takahiro was one of the guests at the I-Expo reception. He was later captured by Wolfram and his henchmen.

After I-Island's security system was reclaimed by Melissa Shield, he was freed.

Eagle (, Washi?): Takahiro's Quirk gives him an eagle-like appearance and presumably abilities. The full capabilities of the Quirk are unknown.