My Hero Academia Wiki
Register
Don't have an account?
Sign In
Advertisement
in: Characters, Males, Heroes,
and 7 more
English

Remember this lesson, Red Riot!! When fighting villains... quickly making them lose the will to fight is everything!!
Taishiro Toyomitsu to Eijiro Kirishima in "Guts! Let's go, Red Riot!"

He employed Suneater and Red Riot during the Shie Hassaikai Arc and Endeavor Agency Arc with the addition of Real Steel.

In his fat form, Taishiro is a big, round man, easily towering over other adults. In this form, his mouth is big and his nose is smaller, which alongside his odd body proportions, give him an odd look. After burning through his fat, however, it is revealed that he is quite muscular, and his body adapts conventional proportions.

His hero costume consists of black pants and an orange, zippered hood, which has the initials of his alias on the front of Fat Gum, written with a clear F,G and an inverted F. Alongside them, he also wears gloves, metallic boots, and a mask that goes around his eyes and over his forehead.

His hero costume in My Hero Academia: Vigilantes, which takes place several years ago, is basically the same, except that the initials of his alias are written with only a black F and G. In addition, he wears dark forearm guards. 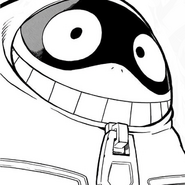 Fat Gum in the manga.

Fat Gum after burning his fat.

Taishiro appears to be constantly hungry, which leads him to eat a lot. He is very friendly towards civilians and other heroes, appearing to be a playful and carefree person. However, he gets extremely serious when the situation demands it, always having the work ethic of a hero.

Whenever he is focused on doing the right thing, he becomes quite impulsive and determined, especially when lives are at stake. In which case, he becomes utterly enraged, because of that, he is rather impatient, disapproving of operations that are rather lengthy.

Due to the time he spent working for the police, Fat Gum is very knowledgeable about the underworld. He is capable of recognizing potential when he sees it, complimenting Tamaki's prowess as a hero, though the latter thinks of it as harassment. He also extends this to Eijiro after he held his own against a villain and praised his will to continue.

Taishiro is a kind man and will prioritize helping people and saving lives first. He cares deeply about the well being of others, especially those in his care, which is why he becomes so angry when villains threaten the lives of others. He was very worried about Eijiro's state after the fight with Eight Precepts of Death and cried tears of relief when he realized Eijiro was fine.

Overall Abilities: Taishiro is a very capable individual, possessing impressive formidability, even for his rank as the No. 58 Pro Hero. Taishiro uses Fat Absorption as an effective way of restraining criminals in his line of work, enveloping them with his large figure. Despite his size, Taishiro makes sure to subdue targets as quickly as possible. In combat, Taishiro frequently acts as a human shield for his allies, since most attacks barely faze him anyway. Should he find himself against an enemy that is able to bypass his defenses through sheer power alone, Taishiro has the option of trading his fat away for a counterattack powered up by the sum of all the impact energy dealt by the foe on his body.

Taishiro's abilities were pushed to the limit when he and Eijiro battled against Kendo Rappa and Hekiji Tengai of the Eight Bullets. Kendo first sent a body-hardened Eijiro flying a good distance away with a single punch before turning his attention to Taishiro (who was distracted by Eijiro being hurled away) and repeatedly barraged him with a volley of punches throughout their battle. Taishiro attempted to throw a punch at Kendo but was blocked by a barrier erected by Hekiji. Once Eijiro regained his resolve and stepped in to better endure Kendo's flurry of punches, Taishiro was bought enough time to transfer all of the accumulated energy he absorbed from the impact Kendo's attacks, into one final punch to ultimately defeat the 2 Shie Hassaikai members.

Keen Intellect: Taishiro possesses a very keen intellect and analytical mind. After witnessing the Quirks of Kendo and Hekiji, Taishiro realized the duo were not on the Quirk roster for Shie Hassaikai Raid Team, and that battling the pair would be difficult. Following his second endurance of Kendo's bullet punches, Taishiro surmised that getting in close doesn't give the BMI hero a chance to dodge the assault, and due to the amount of strength behind the brawler's attacks, Taishiro's Fat Absorption couldn't absorb all of the damage. With his deductions, Taishiro concluded that Kendo would wear him down until the hero was out of might. And, in spite of the bickering he noticed between Kendo and Hekiji, Taishiro knew that Hekiji would still produce a barrier if Kendo needed it, rendering the defeat of the Yakuza dyad near-impossible with Hekiji still standing.

Withstanding Kendo's onslaught a third time, Taishiro noticed that the Eight Bullets member's punches were getting faster, and each blow was stronger than the last, making the obese hero question as to whether he can hold out against Kendo as long as he intended. In the aftermath of the battle, Kendo was able to rise to his feet, making Taishiro deduce that Hekiji's barrier had cushioned his energy-stockpiled attack. When Kendo told the battle-worn BMI Hero there being a medical supplies room that him and the present heroes can use to treat their injuries, Taishiro, taking note on the candidness of the brawler's words understood that Kendo wasn't leading him and Eijiro into a trap, as he skeptically believed was the case at first.

Fat Absorption (, Shibō Kyūchaku?): Taishiro's Quirk allows him to make anything adhere to his obese body on contact and sink into his body fat. His fat can also store kinetic energy, which he can convert into offensive muscle at the cost of his fat, thus weakening his defense.

Taishiro's stats, according to the Ultra Analysis Book