My Hero Academia Wiki
Register
Don't have an account?
Sign In
Advertisement
in: Characters, Males, Mutants,
and 8 more
English

Soramitsu Tabe (, Tabe Soramitsu?) is one of the Eight Bullets who works for Shie Hassaikai.

Soramitsu is a slim man with circular eyes, dark eye bags and short, unruly, black hair. He also has a notably large mouth, possibly due to the nature of his Quirk, and straight teeth.

He wears a ragged burlap sack mask that covers his entire head and is held by a rope knot located around his neck. The mask has two openings from where his eyes are visible, and a stitched smile. A purple dress shirt and grey pants. 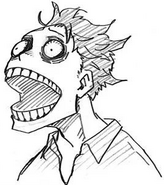 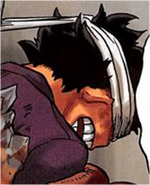 Soramitsu appears to be insane. He is also always hungry and thus obsessed with eating. His Quirk and personality made it difficult for him to conform into society.

Soramitsu, just like other members of the Eight Bullets, is a hopeless person who lost his dignity and no longer sees any purpose in continuing to live and therefore is completely devoted to Shie Hassaikai. He is not afraid of giving away his life for the group. He values his fellow Bullets as genuine friends due to him relating to their similar tragic pasts and lack of worth. This friendship proves to be very strong as he was not willing to eat Yu Hojo, despite his dedication to Overhaul and his willingness to kill anyone who gets in their way.

Soramitsu Tabe was once a man who didn't fit into society and was tossed aside. At some point, he was found by Overhaul and joined the Shie Hassaikai.

After Mimic launches Sir Nighteye's group into an underground hall, Soramitsu appears alongside Yu Hojo to confront the heroes and the police officers. Suneater says that he'll fight them alone and declares that they're just time-eating pawns. Toya tries to use his Quirk to steal the officers' guns, but Eraser Head stops him by erasing his Quirk. Yu pulls out his gun, but before he can use it, Suneater jumps in and uses his tentacles to disarm and immobilize the three at the same time. Suneater then tells the others to go ahead and leave the three to him.

Toya jumps on Suneater using the knife hidden in his mask, injuring one of his tentacles. Yu breaks free and attacks Suneater with his Crystallize, but Suneater defends successfully using Kraken to fight. Soramitsu awakens and starts to eat Suneater's tentacles one by one. Suneater tries to poison him with the poison on his tentacles, but Toya uses his Quirk again to steal it. When Yu is ready to finish Suneater off, he counterattacks and defeats all three at once. Once the battle with his boss ended he was arrested along the rest of Overhaul's henchmen.[1]

Overall Abilities: Being an Eight Bullets member of the Shie Hassaikai, Soramitsu is a very formidable individual. Soramitsu commonly tag-teams with his fellow Eight Bullets members, Toya Setsuno and Yu Hojo and employs effective camaraderie when working alongside the two. Soramitsu capitalizes on the openings Toya creates with his Larceny Quirk to disarm opponents, and then uses his Food Quirk to eat through their assault. The teamwork the Shie Hassaikai has with one another is so impeccable, Tamaki Amajiki, the second strongest of U.A. High School's Big 3, was caught off-guard and overpowered multiple times in his battle against the three. Upon regaining consciousness (since he was incapacitated by Eraser Head as the bout began), Soramitsu began eating his way through Suneater's "Kraken". Since Suneater's Quirk, Manifest allows him to manifest the aspects of the objects he’s eaten, Soramitsu is a highly effective counter against the Big 3 member, as the burlap-masked Yakuza member can use his Food Quirk to devour Suneater's manifestations. While Soramitsu, Toya, and Yu did overwhelm Suneater, the trio were taken by surprise when the hero took advantage of their teamwork and Quirk abilities, resulting in the 3 Shie Hassaikai members being defeated.

Food (, Shoku?): Soramitsu's Quirk allows his teeth to easily chew through and consume any solid substance, no matter how durable. His stomach is able to quickly digest whatever abnormal substances he has eaten with no trouble.

Soramitsu's stats, according to the Ultra Analysis Book

Kai saved him and gave him a chance to have worth. Soramitsu has a strong respect for Kai and will kill anyone who gets in his leader's way, willing to risk his life for him.