My Hero Academia Wiki
Register
Don't have an account?
Sign In
Advertisement
in: Characters, Males, Transformers,
and 6 more
English

"Grinning at me like that. Always has been that way. It's always been people like that... grinning at me... makin' me into a monster!!"
Soga Kugisaki in "Scream"

Soga Kugisaki (, Kugisaki Sōga?)[2] is a vigilante, ally to the Naruhata Vigilantes, and former Instant Villain.

Soga is a tall, skinny young man with wild spiky turquoise hair, a short goatee, and notably inward-slanting yellow eyes with very small eyebrows. His front teeth are shown to be sharpened to the point, while his back teeth seem to just be regular molars.

When he injects Trigger, his physique increases, his hair becomes pointier and he grows spikes on his back and arms. Later, after he is forcefully administered a Trigger overdose by Kuin Hachisuka, he transforms into a monstrous, human-sized porcupine. 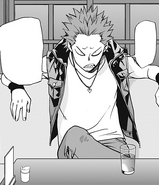 Soga has a cruel and violent personality, and likes to humiliate and attack people. This stems from the fact that he has been discriminated against due to his actions and his Quirk. He seems to think that everyone around him sees him as some sort of monster, and has developed a love of making other people suffer in place of him due to these circumstances.

In spite of these flaws, he shows solidarity with his friends, who he takes a leadership role for. He feels kinship with others who have been looked down upon due to their Quirks. He shows a strong sense of loyalty and care towards them, such as when he went to face Kuin alone and warned her to leave his friends out of their conflict. He also is very defiant when he knows he is being played, totally trashing a selection of Trigger drugs because he refused to aid in Kuin's plan in any way.

Ever since he was saved by the Naruhata Vigilantes from the murderous Stendhal, Soga changed for the better, and became a valuable ally to the Naruhata Vigilantes. As a result, Soga became somewhat of a vigilante himself, convincing and helping Koichi Haimawari to save Pop☆Step, even though it breaks many laws. He became a devoted student to Knuckleduster and preached some of his teacher's beliefs. Though Soga isn't a blind follower and keeps to his own beliefs. When Knuckleduster attempted to kill Number 6 and himself, Soga stopped it, saying they've worked too hard to keep everyone alive.

Soga has developed a firm sense of identity and ideology as a vigilante, lecturing those he thinks needs it. He believes vigilantes are necessary to those who slip through the cracks of the imperfect institutions. He has a complicated relationship with the police, as he knows they're fighting for the same cause and will occasionally help them. Though if he disagrees the police's methods, he'll refuse to cooperate. He dislikes the police prioritising budgeting over doing genuine good, critiquing Naomasa Tsukauchi for providing limited manpower and time to protect Pop☆Step. Soga doesn't care for the legal definition of a villain, refusing to acknowledge someone as such if he believes they are undeserving. Soga prefers policemen who are less rigid such as Eizo Tanuma rather then a by-the-books, Tsukauchi.

Spike (スパイク, Supaiku?): Soga's Quirk allows him to sprout spikes from his body, initially only being able to do so from his hands and feet.

When under the effect of Trigger, he grows spikes all over his back, head, and arms and throws himself spinning at his enemies. Later, when his life is endangered due to Stendhal, Kuin forcefully injects him a Trigger overdose, which causes him to undergo a full-body transformation: growing taller and altering his face to become porcupine-like while additionally growing spikes in the same places that he previously had under the effects of Trigger.