My Hero Academia Wiki
Register
Don't have an account?
Sign In
Advertisement
in: Characters, Emitters, Females,
and 9 more
English

Kota, about your mommy and daddy, Water Hose... It's true that they ended up leaving you behind. But there were definitively lives saved because of what happened to them. I'm sure someday you'll meet someone, and then you'll understand. Someone who'll risk their life to save you... Someone who will be...
Shino Sosaki to Kota Izumi in "My Hero"

Mandalay is a young woman with brown eyes and red hair styled into three bangs going across her face. Mandalay wears a red version of the Pussycat's hero costumes and as part of her costume, she draws red markings beneath her eyes, which resemble cat whiskers.

In her civilian attire, Mandalay dresses in a very reserved fashion, choosing a knee-length skirt, dark leggings, high-heeled shoes, and a turtleneck sweater with a loose collar. 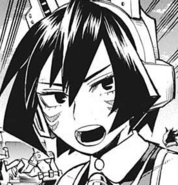 Mandalay in the manga.

Mandalay's personality contrasts with her partner, Pixie-Bob's. While Pixie-Bob is often loud and energetic, Mandalay remains calm and gentle. Even so, she remains just as eccentric and demanding as the rest of her teammates.

Mandalay often shows great concern for others including her nephew Kota, as well as the students from U.A. High. Despite being genuinely caring, Mandalay is not above poking fun at other's expense. She had no problem teasing Class 1-A about how much longer it would take them to cross Beast's Forest than the Pussycats. She extended this to her nephew by pointing out his similar shoes to Izuku.[3]

Overall Abilities: As the leader of the Wild, Wild Pussycats, Mandalay is shown to be a strong and capable Pro Hero, being able to use her Telepath Quirk to give orders to her allies and also spread messages amongst a wide group of people. She is shown to be a competent fighter, facing Spinner from the League of Villains head on and avoiding attacks from his giant makeshift sword. Mandalay can also be devious in battle, as she sent Spinner a flirty comment with her Quirk, allowing her to catch the villain off guard and land a hit on him. She eventually managed to pin down and apprehend Spinner, who only escaped along with Magne thanks to Kurogiri’s aid.

Enhanced Agility: Befitting her cat-theme, Mandalay is very agile, being able to dodge Spinner's attacks while simultaneously striking him.[4]

Telepath (テレパス, Terepasu?): Shino's Quirk allows her to utilize mental transmission and send telepathic messages directly into people's minds.[5] Shino has displayed the ability to send a message to tens of people at a time. She can send messages, but she can't receive them.[6]

Cat Gloves: Mandalay's gloves act similar to real cat paws, as the claws can be used as weapons to tear and slash at the enemy.

Headphones: The cat ear-shaped headphones of her costume can be used to communicate with the other Pussycats members.