My Hero Academia Wiki
Register
Don't have an account?
Sign In
Advertisement
in: Characters, Males, Yakuza,
and 8 more
English

Emotions are unnecessary burdens if things are to proceed smoothly. You should know that better than anyone.
Shin Nemoto to Mirio Togata in "Mirio Togata"

Shin Nemoto (, Nemoto Shin?) is one of the Eight Bullets who works for Shie Hassaikai.[1]

Shin is a slim man with short, light-colored hair that he wears parted with bangs hanging down his forehead.

Shin wears a black cape and a pair of baggy 3/4 pants, as well as a black bowler hat and pale sneakers. Like the other Eight Bullets, he sports a black plague mask. 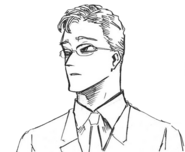 Shin appears to be a very cynical man as a result of the fact that he could never find anyone worthy of his trust and friendship thanks to his Quirk. He states that emotions are unnecessary to carry out objectives, but it is unknown if he actually believes this or if it was just a way to demoralize Mirio Togata as he fought Overhaul.

Because Overhaul is the only truly sincere person he’s ever met, Shin is extremely devoted to him. Since he is granted knowledge about his boss' plans, Shin holds himself in high esteem among the Eight Bullets, viewing himself as special and the only one of the group worthy of walking alongside Overhaul. Shin's loyalty to Overhaul is enough to make him follow his boss even after getting completely overwhelmed in battle.

Overall Abilities: Being an Eight Bullets member of the Shie Hassaikai, Shin is a very formidable individual. However, Mirio Togata deduced that Shin isn't the kind of individual who would be on the front lines of a battle, implying that Shin has low battle prowess. While lacking direct combat abilities, Shin does possess some level of marksmanship, which he employed against Mirio. Shin also displayed exceptional camaraderie with Deidoro Sakaki; Deidoro disrupts the opponent’s equilibrium, while Shin uses his marksmanship to gun down the off-balance target.

Keen Intellect: Shin is a very keen individual, coupled with an analytical wit. As a former con artist, Shin has knowledge about confidence tricks and uses those abilities in conjunction with his Quirk, Confession, to psychologically dishearten victims, making guerrilla warfare Shin's specialty.

After using his Quirk on Mirio, and learning the mechanics behind the U.A. student's own Quirk, Permeation, Shin deduced that the latter used his intangibility to avoid Joi Irinaka, who was manipulating the Shie Hassaikai Compound, and other members of the Hassai Group. He also utilized his psychological skills to wear down Mirio by speaking of the hero's regret over not being able to save Eri upon first encountering her. When he was incapacitated, Kai Chisaki gave a Quirk-Destroying Bullet to Shin to use it on Mirio, but the con artist realized he couldn't hit the untouchable target. So Shin decided to take aim at Eri, Mirio's source of motivation, knowing full well that Mirio would take the bullet instead.

Confession (き, Makoto Tsuki?): Shin's Quirk allows him to force his victim to answer truthfully after he asks them a question.[1]

Shin's stats, according to the Ultra Analysis Book

Handgun: Shin is armed with a simple handgun, which he uses as his main form of offense.