View source
watch 01:33
Wiki Targeted (Entertainment)
Do you like this video?
Play Sound

Koichi's Slide and Glide Quirk shoots a repulsion force out of his hands and feet, although he mostly uses it to glide across the ground. However, he can condense the energy around his body into a force, that is concentrated on the palms of his hands, allowing Koichi to shoot a repulsion beam.

To use this technique, Koichi must lock his feet in place first or else the recoil knocks him off balance. Then he then proceeds to build up power in his hand and releases it all at once.

He is able to fire consecutive light repulsion beams and concentrate his shots to fire a more powerful charged repulsion beam.[1]

Over the years, Koichi improves his skills with the Scrappy Thrust Style, being able to develop his own fighting style that allows him to use this ability in close combat: the Slap Style.[2] 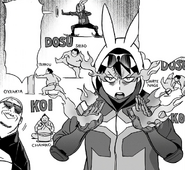