My Hero Academia Wiki
Register
Don't have an account?
Sign In
Advertisement
in: Characters, Females, Asui Family,
and 4 more

My Hero Academia - Training of the Dead

Keeping with her family's froggy theme, she has a tadpole-like appearance. She has large eyes, similar to her sister, Tsuyu Asui's, with three upper eyelashes and notably small eyebrows. She has light-tanned skin and her mouth is usually set in a pout-like shape. Her dark green hair is worn in low pigtails. 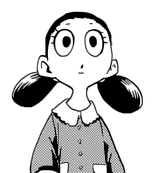 Satsuki in the manga.

Not much is known about her personality at this time.

Sometime before the start of the series, Satsuki was born to her parents Ganma Asui and Beru Asui.

Tsuyu is her older sister who has watched over her & her brother while their parents are away. Not much else is known about the relationship between the two at this time other than it being likely they are on good terms.