My Hero Academia Wiki
Register
Don't have an account?
Sign In
Advertisement
in: Characters, Females, Emitters,
and 8 more
English

This article is about the Wild, Wild Pussycats member. For the No. 10 Pro Hero known as Ryukyu, see Ryuko Tatsuma.

Ryuko is a woman with blue eyes, and long blonde hair that's mostly combed back save for her bangs.

Pixie-Bob wears a light blue version of the Pussycat's hero costume. She draws two blue dots on her cheeks whenever she wears it. Her costume also includes a tinted visor that she uses with her Quirk. 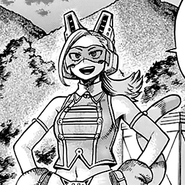 Pixie-Bob in the manga.

Ryuko is a very hyperactive and loud person with little regard for how she may come off to other people.

She is very self-conscious about her age and punished Izuku Midoriya when he nearly brought it up, saying that she's still eighteen at heart. Shino Sosaki says Ryuko is in a rush to find love and that her impatience has only grown worse over the years. Ryuko seems to have a fondness for young promising heroes like Izuku, Tenya Ida, Shoto Todoroki, and Katsuki Bakugo and is unafraid to display it.

Despite her wackiness, Ryuko has shown she has the ability to tone back her eccentrics and communicate like a normal person. She even called Eijiro Kirishima and Denki Kaminari weird for acting strangely when they were eating dinner. Ryuko also showed great sadness when discussing Kota Izumi's past.

Earth Flow (, Doryū?): Ryuko's Quirk allows her to freely manipulate the earth for a variety of effects.[2]