My Hero Academia Wiki
Register
Don't have an account?
Sign In
Advertisement
in: Characters, Females, Transformers,
and 8 more
English

Why don't we get started? There's a child in need out there. That's what matters most.
Ryuko Tatsuma in "Close at Hand!!"

This article is about the No. 10 Pro Hero. For the Wild, Wild Pussycat member known as Pixie-Bob, see Ryuko Tsuchikawa.

She employed Nejire Chan, Uravity, and Froppy during the Shie Hassaikai Arc and Endeavor Agency Arc.

Ryuko is a woman with chin-length blonde hair, which she wears swept back with a headband, a long fringe over the right side of her face, covering her eye. She has thin, yellow, inward-tilting eyes with slit pupils and notably sharp teeth, these aspects are purposefully reptilian as a reference to her Quirk.

Her hero costume consists of a dark red, traditional qipao with a pale green scale trim around her shoulders, which seems to only be slit on the left side, with yellow claw patterns on the bottom and smaller ones around her neck. She wears knee-high boots and a strap around her exposed thigh. She wears long, almost sleeve-like white gloves that nearly reach her shoulders, with higher tabs on the outer sides, and they expose her hands from the wrist. She wears a matching green headband with four large, pale purple claws attached, covering the right side of her face, and a set of small black dragon wings protrude from the back of her head, with a number of gold spiked cartilage piercings decorating her left ear.

When she activates her Quirk, her body transforms into that of a large, winged dragon with pale gray scales, although she still has the same skin tone, hair, and eyes. Her hero costume remains visible bar her boots and the claws that were on her face have transferred to her right hand.

During the fight against Tomura Shigaraki both her hands were damaged by the former.[3]

Ryuko in the manga. 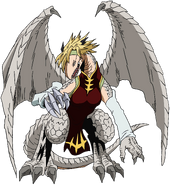 Ryuko is a humble and gentle person, giving praise where it is deserved and not expecting gratitude in return. She always keeps her composure in a combat situation. Ryuko sees talent where it's due and is willing to hand difficult tasks to those who she thinks can handle them.

Her humble side is further highlighted when she considered herself the only one responsible for dropping to the tenth spot on the Japanese Hero Billboard Chart, and admitting that she could have done better. On top of that, when asked to give a speech as the no. 10 hero, she mentioned that she would have refused this rank if it was possible, as she doesn't believe herself worthy of this spot after failing to save a person.

Ryuko seems to have a soft spot for children, as shown by her caring and tutoring side towards her trainees. She was also saddened upon learning that Overhaul was using his own "daughter" to create Quirk-Destroying Drugs, and made it clear to the other heroes that rescuing Eri should be their top priority.

Enhanced Strength: Ryuko's dragon form gives her great strength, which she demonstrated by blocking Rikiya Katsukame's punch, a large yakuza with superhuman strength, and then smashing him into the ground.[4] Later, despite her stamina having been drained, she was able to grapple with him for a few moments as well as knock him back, hurting him in the process. The latter feat is particularly significant, as Rikiya had just shrugged off a powerful attack from Nejire.[5]

Immense Durability: Ryuko is extremely resistant to blunt trauma in her dragon form. Despite being weakened by Rikiya's Quirk, she took no damage when Nejire used her most powerful attack to drive Rikiya and her into the ground, a move that knocked him out, despite Ryuko being the only one who was hit by the shockwave directly.[5]

Dragon (ドラゴン, Doragon?): Ryuko's Quirk gives her the ability to transform into a large western dragon.[4] This form grants her superhuman strength and durability, powerful jaws and claws, and wings which allow her to fly.[5]

Ryuko's stats, according to the Ultra Analysis Book

Size Changing Costume: Ryukyu's Hero outfit enlarges upon her dragon transformation and returns to normal size as she does.

Deutsch Polski Русский
*Disclosure: Some of the links above are affiliate links, meaning, at no additional cost to you, Fandom will earn a commission if you click through and make a purchase. Community content is available under CC-BY-SA unless otherwise noted.
Advertisement