My Hero Academia Wiki
Register
Don't have an account?
Sign In
Advertisement
in: Characters, Males, Transformers,
and 9 more
English

We will tear down the existing framework and rebuild this world... as a place where people are free to be themselves and use their abilities as they see fit!
Rikiya Yotsubashi to the League of Villains in "Cockroaches"

The Mother of Quirks (Ancestor; deceased)

This article is about the Meta Liberation Army's Grand Commander. For the Eight Bullets' member of the Shie Hassaikai, see Rikiya Katsukame.

Rikiya Yotsubashi (ツ, Yotsubashi Rikiya?),[1] also known by his alias Re-Destro (リ・デストロ, Ri-Desutoro?), is the President and CEO of the Detnerat Company, and was also the Grand Commander of the modern Meta Liberation Army, which he inherited as the descendant of the infamous villain Destro.[2] He was the primary antagonist of the Meta Liberation Army Arc.

Rikiya is a tall, odd-looking, middle-aged man with a prominently long, pointed nose and obtruding chin, as well as small, dark eyes. He has short, orange-brownish hair, set noticeably far up his forehead, a widow’s peak pointing downwards in the center, and he wears it swept back around his head. He doesn’t have any visible eyebrows, and also possesses two dark moles on the left of his forehead. This stems from a result of his Quirk that causes his hair to recede. Sometimes, when he feels upset, a dark fire-like stain spreads around his eyes, becoming a large facial stain that resembles a domino mask. Despite appearing relatively slim, he is shown to have quite a muscular mantle and figure.

In his childhood, he wore a suit similar to the one he will have as an adult. As a young adult, he had a similar appearance but wore his hair differently, leaving it down with one lock over his face. During that time, he possessed thin eyebrows.

He is always seen in a suit that consists of a green dress shirt, a green tie, and a black, pinstriped blazer with matching dress pants. He has also been seen wearing a black hat, and black coat on his shoulders, while on his way to a meeting with the rest of the Liberation Army leadership.

Following his defeat at the hands of Tomura, he lost both of his legs after being forced to sacrifice them from Tomura's Decay.[4] Without his legs, he took to using a mechanical chair to get around.[3]

He later fits himself with mechanical legs.[5]

Rikiya in the manga.

Rikiya as a child. 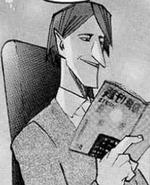 Rikiya with his mask.

Rikiya, after sacrificing his legs.

At first, Rikiya seems like a completely normal and balanced person. He generally acts as an easygoing individual who has no problem with people making fun of him, even his employees, and genuinely believes in making a better world for people with difficult Quirks.

However, this public persona is merely a façade, for he is a devout follower of his ancestor's ideals and believes that Quirks should be celebrated rather than suppressed and controlled. Rikiya does not hesitate to kill and torture people to achieve his goals, and he does not tolerate the insult or lack of respect for either Destro or the Meta Liberation Army. When his secretary Miyashita defined Destro's book as pretentious and the Liberation Army as terrorists, he snaps his neck and kills him on the spot. However, he does seem to show some remorse by shedding genuine sad tears about the act.[6] He also values his colleagues and was saddened by Curious' death at the hands of Himiko Toga, even crying about it.[7]

Due to his dissatisfaction with the current hero society, he's prone to pointing out its flaws and shortcomings, normally using villains as examples. He believes that, despite the various Quirks that exist, people still need to fit into a very specific mold to be accepted by society, and are otherwise callously cast out. He holds the belief that villainy is an escape many, such as outcasts turn to because they have little other options. He uses this to further endorse his agenda, claiming that in a society with completely liberated Quirks, no one would have to feel alone or estranged.

He is quite condescending, as he initially views Tomura as nothing more than a hoodlum and his ragtag organization as a group seeking nothing more to destroy with no real ambition. He also mocked Tomura on not having a proper education when speaking to him about his own goals.[8]

Despite his arrogant view, he does recognize the threats of his foes, as he was quick to throw Tomura away after seeing his Quirk improved or seeing him survived a stress attack. After being defeated, Rikiya shows himself to be able to admit his loss. He also prevents his subordinates from retaliation, since it will prove to be pointless. He voices admiration to his foe and gives control of his army to him.[4] Rikiya later shows the ability to admit his mistakes, as he voices this to his subordinates when abdicating his role as supreme leader. To his new superior, he shows a far more submissive side and seeks to please him in any way.[3]

Likely due to the effects of his Meta Ability, Rikiya seems to be a rather emotionally unstable person who is prone to sudden and drastic mood swings. This is best evidenced when his calm, cheerful demeanor is shattered and filled with enormous stress in a matter of seconds when alerted of a hero army raiding his hideout.[9]

Overall Abilities: Being the leader of the Meta Liberation Army, Rikiya is a highly respected and powerful individual, with a very proficient handle on his Meta Ability. When facing the formidable villain Twice backed by clones of the League of Villains whom the latter created using his Quirk, Double, Rikiya stood in place and nonchalantly defeated most of Twice's clones almost instantly. In his Stress form, Rikiya was easily able to overpower Tomura, the headmen of the League, as well as destroy most of the latter's left hand. Even when Tomura was undergoing an awakening and an increase in physical aptitude, Rikiya was still able to best Tomura; by taking his Meta ability to a higher output, Rikiya sent Tomura flying across Deika City.[10]

Since losing his legs to Tomura, Rikiya has been forced to wear prosthetics. These legs struggle to hold the full weight of his Stress Quirk, as shown during his clash with Tsukuyomi when the latter managed to overpower Rikiya after his legs snapped.[11] This happened later, during his fight against Edgeshot.[12]

Corporate CEO: Rikiya is the Chief Executive Officer of the Detnerat Company, an industry that specializes in making clothing and other items for people with "abnormal" bodies.

Tactical Intellect: Rikiya set up a situation that forced the League of Villains into a war with the Meta Liberation Army. He was able to consider multiple details and made the correct assumption that the League of Villains didn't have any Nomu on hand. After destroying much of Tomura's left hand and experiencing Decay still active without all 5 of Tomura's fingers making contact, Rikiya correctly deduced that Tomura was undergoing an awakening, allowing his Quirk to evolve under specific circumstances. Rikiya even took noticed of Tomura's increased speed and noted that if Tomura's had his newly increased physical parameters during the Kamino Incident, Tomura would’ve easily killed at least one or two of the Pro Heroes during that event, even without his Decay Quirk.[10]

Stress (ストレス, Sutoresu?): Rikiya's Meta Ability allows him to store up any fear, anger and/or frustration he feels and convert it into raw power. When Re-Destro accesses this meta ability, his size and strength increase significantly.[8][14][15]

Due to him having to contain his stress in order to fully use his Meta Ability in combat, it has the side effect of him developing early male pattern baldness.

Rikiya's stats, according to the Ultra Analysis Book

Claustro (クレストロ, Kuresutoro?) is a wearable suit of armor developed by Detnerat that amplifies Rikiya's Stress to at least 150%. It was destroyed during his fight with Tomura.

Español Français Polski Русский
*Disclosure: Some of the links above are affiliate links, meaning, at no additional cost to you, Fandom will earn a commission if you click through and make a purchase. Community content is available under CC-BY-SA unless otherwise noted.
Advertisement