Tenya activates Recipro Burst by forcing the torque and RPM of his engines into overdrive. This grants him explosive power and incredibly fast speed for ten seconds. After the time limit is reached, his engines will stall for a short period of time.[1]

Using this technique, Tenya was able to propel Team Todoroki fast enough to steal Team Midoriya's headband in the blink of an eye.[1] He also uses this move to enhance the striking power of his kicks, able to deliver multiple powerful blows in quick succession.[3]

Not even the agile Hero Killer Stain is able to avoid all of Tenya's kicks effectively while Recipro Burst is active.[4] 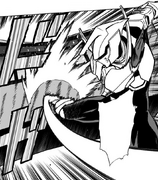 Retrieved from "https://myheroacademia.fandom.com/wiki/Recipro_Burst?oldid=307138"
*Disclosure: Some of the links above are affiliate links, meaning, at no additional cost to you, Fandom will earn a commission if you click through and make a purchase. Community content is available under CC-BY-SA unless otherwise noted.