This article is about the species referred to collectively as "Nomu." For any other Nomu related articles, see Nomu (Disambiguation).

The Nomu (, Nōmu?), sometimes referred to as Artificial Humans, are deceased individuals whose bodies have been heavily modified by Doctor Kyudai Garaki in order to hold multiple Quirks and reanimated to act as mindless super-soldiers for the League of Villains, and later, the Paranormal Liberation Front.

Nomu are powerful monsters created from human corpses whose bodies were drastically altered in order to make them stronger and allow them to hold multiple Quirks.[1] The aforementioned human experiment ceases all higher brain function, leaving them with no will of their own, and making it so they require commands from a superior in order for them to act.

All For One plays a vital role by granting them multiple Quirks, but without him, though unclear as to how the Nomu are produced, Doctor Garaki artificially transplants Quirks through advanced surgery.[2]

Doctor Garaki and All For One possess several different laboratories that house these creatures.

The first Nomu appears alongside Tomura Shigaraki & Kurogiri during their assault on the U.S.J.. That Nomu proves to be incredibly powerful, easily subduing Eraser Head upon command.

Izuku Midoriya tries to engage Tomura with a powerful smash and Nomu takes the blow using its Shock Absorption Quirk. Before the scene escalates any further, the No. 1 Hero All Might appears.[3]

Nomu is defeated by All Might and arrested by the Police Force. Naomasa Tsukauchi and his colleagues investigate Nomu and analyze his DNA. They discover he was originally just a small-time thug that had his body modified to hold multiple Quirks. This helps Detective Tsukauchi connect the Nomu to All For One himself.[4]

Tomura Shigaraki and Kurogiri try to enlist the Hero Killer: Stain into their ranks. Their meeting gets hostile and Stain returns to Hosu City. Angry, Tomura requests the power to destroy the Hero Killer from his master. All For One tells Tomura that six new Nomu are in development but he can only use three.[5]

The trio of Nomu wreak havoc on the city and easily overpower Masaki Mizushima and his fellow Pro Heroes. The white Nomu crashes into a bullet train during a fight. Gran Torino leaps into action and tackles it back into the street. The Nomu attacks indiscriminately at civilians, but Endeavor arrives to stop it.

The white Nomu sends Endeavor's Hellflame back using an Absorption and Release Quirk. It follows up with a Muscle Augmenting Quirk and a Tongue Web combination, forcing Gran Torino to strike down the monster with a powerful Jet force dropkick.[6]

Endeavor's sidekicks restrain that Nomu while their leader goes to deal with the rest. The winged Nomu and the black Nomu prove to completely outclass an entire group of Pros. Endeavor rushes in at the last moment to save their lives. Hellflame manages to completely cauterize the black Nomu's head, destroying it beyond Super Regeneration's ability to repair it.[7]

The winged Nomu flees the battle and Endeavor pursues it through the city. The No. 2 Hero manages to injure the Winged Nomu and save its hostage. In the aftermath of the U.A. students' battle with Stain, the Winged Nomu tries to secure another hostage. It grabs Izuku Midoriya and tries to fly away, but Stain acts quickly and kills the Nomu after paralyzing it with his Quirk.[8]

Stain's influence draws new recruits to the League of Villains. Nine new villains and the chainsaw Nomu form the Vanguard Action Squad. They are sent to The Beast's Forest to invade the U.A. training camp and capture Katsuki Bakugo.

In order to rescue Katsuki, U.A. students: Izuku, Momo, Shoto Todoroki, Tenya Ida, and Eijiro Kirishima track down one of the League's hideouts. They come across a Nomu production factory that house several different Nomu.

The Nomu Factory is raided by the Hideout Raid Team and all thirteen different Nomu, including the chainsaw Nomu, are restrained.[10] All For One makes a rare appearance and attacks the Pro Heroes. He warps the Nomu to the other hideout to free Tomura and the other villains.

The Nomu attack the Hideout Raid Team's other squad and keep them busy while All For One warps the villains back to the Nomu Factory. These mid-level Nomu are eventually bested by Endeavor, Edgeshot, Kamui Woods, and the Police.[11]

Following the Hero Billboard Chart JP, Hawks meets with Endeavor in Fukuoka to discuss the appearance of more Nomu when they're suddenly attacked by Hood. Hood is a slightly intelligent Nomu and the most powerful Nomu to appear by a wide margin.

Hood is able to overpower the No. 1 Hero and cause a disastrous scene in Fukuoka comparable to the destruction All For One caused in Kamino. Hood even has the ability to produce nine low-level Nomu from its body using a storage Quirk.

Endeavor and Hawks are eventually able to work together to completely incinerate Hood beyond regeneration. Dabi later reveals this was just a test of the new Nomu's capabilities.[12]

Prior to the Hero Billboard, Doctor Garaki makes contact with the League of Villains. In his laboratory, Dabi notices 12 unique Nomu kept in stasis. The Doctor calls them High-End and commends Dabi's eye. Later, he enlists Dabi's help to test one of the High-End.[13]

When the Pro Heroes invade Kyudai's laboratory, many Nomu attack the heroes aboveground while other Nomu attempt to take care of Mirko, although the hero easily dispatches of them.[14]

The Hero bursts into the laboratory, damaging Johnny before it can warp Kyudai and Tomura away. The Doctor notes that the High-End Nomu are still in the testing phase and that it would take at least three more hours until they were finished, as it took Hood more than ten hours to stabilize after activation. To Kyudai's surprise, the little Nomu Mocha attacks the Hero without being ordered to, this allows the Doctor to dodge Mirko's kick and activate a remote control, which unleashes five of the High-End Nomu that all attack Mirko.

The High-Ends remark that it's been a while since they fought, and that they can go wild against the heroes. Crust arrives to assist Mirko, and the two of them prepare to fight the High-End Nomu.[15]

After Tomura finally awoke from his stasis, he disintegrated all of the activated High-Ends and the majority of the laboratory. He later revealed he was keeping his Decay Quirk tamed so he doesn't destroy the tanks containing the inactive Nomus. Tomura combined Air Cannon and Radio Waves to awaken the contained Nomus that hadn't entered their testing phase and couldn't think for themselves, but still possess overwhelming power. Doctor Garaki dubbed these specific as Near High-Ends.[16]

The Near High-End Nomu were primarily used as a distraction that kept majority of the Pro Heroes busy from taking part in the battle against Tomura. Around half of the Near High-Ends were killed by the Heroes, while the Nomu took out half of the heroes. When Tomura's situation proved more dire, he summoned four of the Nomu to his location, hoping to help their master out, proving to be trouble for the Heroes on the battlefield still able to fight, like Lemillion and Best Jeanist.[17]

Once All For One gained control of Tomura's body, he again used Radio Waves to command the remaining Near High-Ends to help them make their escape.[18] Of the 10 that were still active, 3 managed to be taken down by the Heroes. The other 7 that escaped, due to their tireless nature, were then ordered by All For One to go free his main body in Tartarus.[19] They successfully manage to execute the raid, thanks to the command of both All For Ones.[20] Currently, these 7 Near High-Ends are the only Nomu left remaining.

The Nomu possess multiple Quirks and are designed to serve as mindless fighters. According to Doctor Garaki and All For One, there a few different grades of Nomu, and they're categorized into Lower-Tier, Middle-Tier, Upper-Tier, Near High-End, and High-End according to their physical enhancements and the amount of Quirks they possess.[1]

The Lower Tier Nomu serve as foot soldiers, and even though they are the weakest type of Nomu, they are still strong enough to overpower minor Pro Heroes. These Nomu have light colored skin and generally possess only one or two Quirks, as well as enhanced physical strength. They usually need a voice command from a designated keeper to perform an attack.[14]

Doctor Garaki keeps some of these Nomu close to him, whose Quirks he considers particularly useful.

The Middle Tier Nomu are more powerful than the Lower tier. These Nomu have a more vibrant coloration of their skin than the Lower-Tier.

The Upper Tier can contend with top Pro Heroes. These Nomu are black in color, possess the Super Regeneration Quirk, and are even stronger than Middle Tier Nomu. According to Garaki, those in the upper-tier are at least as strong as ten average people combined.[1]

An incomplete form top-grade Nomus, that are stronger than the Upper-Tier Nomus, possessing phenomenal strength, but can't think for themselves and haven't entered their testing phase.[16] They are said to possess the same level of strength and speed as the High-End Nomu, but they lack their intelligence.[21]

Completely outclassing the other types of Nomu are the High-End, possessing stats well beyond those of the Upper-Tier Nomu, with superior strength and possessing up to six Quirks. They can even overpower the top Pro Heroes. The more advanced High-End Nomu all have the ability to think on their own and retain their original personalities.

They all appear to have impressive deductive skills, as Hood was able to quickly figure out Endeavor's limitations on his Quirk,[22] and Woman instantly deduced the nature of Eraser Head's Quirk and disappeared out of his line of sight.[23]

To create a High-End Nomu, Kyudai Garaki carefully selects the most battle-crazed Villains. However, obtaining the most suitable candidates and preparing them to become High-End is an immense effort, since the artificial Quirks transplant involves complex surgeries and at least three months of stabilization time. Without All For One's power, the production of the High-Ends is tremendously arduous and difficult.[1] 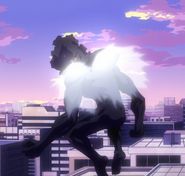 Retrieved from "https://myheroacademia.fandom.com/wiki/Nomu?oldid=323614"
*Disclosure: Some of the links above are affiliate links, meaning, at no additional cost to you, Fandom will earn a commission if you click through and make a purchase. Community content is available under CC-BY-SA unless otherwise noted.