Sir Nighteye's Hero Agency is a large, five-story building controlled by Sir Nighteye. He employs two sidekicks and two U.A. students to work for him.[1]

Inside the building contains Sir Nighteye's personal office that is decorated with multiple posters of All Might, as well as his main desk where his laptop sits and a large bookshelf.[2] On the second floor, there is a large meeting room.[3] 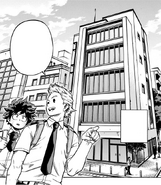 Nighteye Agency in the manga.

SIr Nighteye's career as a hero begins when he broke his association with All Might due a disagreement. After his bloody fight against All For One, All Might was seriously injured. Nighteye asked him to look for a successor and retire, but he refused because with his absence the crime would gain strength. Sir Nighteye threatened to stop helping him if he continue his reign as the No. 1 Hero, because he predicted with his Foresight that if he continued on that path, in six or seven years he would have a death too horrible to describe at the hands of a villain. Despite the warning, All Might ignored Nighteye's pleas and they dissolved their partnership completely.

After this dispute, they went their separate ways. Nighteye started his own hero career, opening his own Hero Office,[4] and hired Bubble Girl and Centipeder to work with him as sidekicks. Despite his breakup, Nighteye doesn't hold any resentment or ill-will against All Might, decorating his office with merchandising of him. In fact, the objective for which he opened his own hero office was to find a way to prevent his prediction about All Might's death from being fulfilled.[5]

He sought the right candidate to be the new heir of the One For All and, in this way, replace All Might as the new symbol of peace. Sir Nigheteye thought he found the right candidate in the young Mirio Togata, however Toshinori informed him that he had already chosen a Quirkless young boy to be the ninth user of the One For All. Sir Nighteye was against this decision, and took it upon himself to cultivate Mirio Togata, whom he believed to be the truly appropriate successor.[4] Thanks to his training, Mirio became in one of U.A. High School's most powerful students and a contender for the No. 1 spot among Pro Heroes.

The Nighteye Office begins tailing a Yakuza organization called the Shie Hassaikai after know a peculiar incident that involved Overhaul, the leader of the Yakuza, with a gang of thieves called the Team Reservoir Dogs. Despite the Police Force labeled it as an accident, the Nighteye Office found strange since it didn't make any sense and decided to investigate the Shie Hassaikai.

Centipeder started investigations regarding the Shie Hassaikai and found out that they have been contacting other villainous groups and involvement with black market groups all over Japan; their motive for doing so is to increase their organization and finance.[6] Soon after the official investigation began, the Shie Hassaikai made contact with the League of Villains.[7]

Shortly after starting the investigation, Sir Nighteye takes Izuku Midoriya, the boy All Might had decided to transfer the One For All, to do the Hero Work-Studies at his agency,[1] to make him realize if he truly is the worthy successor of One For All by making him work alongside the pros.[2][8]

In the following days, after a series of investigations and fortuitous encounters,[9] [4] Sir Nighteye discovers that Overhaul has the ability to manufacture a drug that permanently eliminates Quirks, and that the main source for its production is a girl named Eri. Sir Nighteye organizes a meeting with numerous heroes to explain the situation to them and to organize a raid on the main base of the Shie Hassaikai.[6]

After several days of preparations, Nighteye begins the raid to the Shie Hassaikai's Headquarters with a combined force of Heroes and police, facing the members of the Shie Hassaikai. Although the Yakuzas put up a fierce resistance, the heroes managed to capture them. Izuku manages to rescue Eri after defeating Overhaul, but Mirio loses his Quirk after being hit by one of the Quirk-Destroying Bullets, and Sir Nighteye dies during the assault. As if that were not enough, The League of Villains manages to get hold of the Quirk-Destroying Bullets as well as the serum.[10]

With the beginning of October, the work-study gang along their guardians and All Might, attend to Nighteye's funeral. Centipeder takes over Nighteye's Office, and he and Bubble Girl tell Mirio that he is welcome back anytime. Due to what happened, it was decided that the Hero Work-Studies program was to be postponed for the time being. [11]

With Hero Work-Studies about to restart, Izuku phones Centipeter to ask him about doing the Work-Studies in the agency, but Centipeter tells him that it won't be possible because they have too much paperwork. Then, he accepts Shoto's invitation to do it at his father's agency.[12]