My Hero Academia Wiki
Register
Don't have an account?
Sign In
Advertisement
in: Characters, Males, Todoroki Family,
and 3 more
English

I get the feeling mom and sis here want to forgive you. But all I see here is the same maniac, who all of a sudden is getting rave reviews. You might look like a changed man, but you're not.
Natsuo Todoroki to Enji Todoroki in "The Todoroki Family"

Natsuo Todoroki (, Todoroki Natsuo?) is a college student. He is the second son of Enji and Rei Todoroki, the younger brother of Toya and Fuyumi Todoroki and the older brother of Shoto Todoroki.[2]

Natsuo is a young man of above average height with a rather well-built figure. He sports white spiky hair with two short strands hanging down the middle of his forehead. He also has gray eyes with fairly long eyelashes.

In his younger years, both sides of Natsuo's hair had two streaks of crimson red. It is unknown why these same details are absent on his current appearance, although it's possible that he could have dyed them or they became white like Toya's hair did.

Natsuo as a baby. 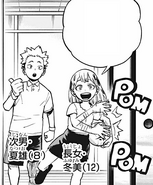 Natsuo at the age of eight.

Natsuo has an easy-going attitude for the most part, he has shown to care deeply for his family and exhibits a more serious side when dealing with sensitive issues involving their past.

Natsuo is shown to resent his father for his abusive actions; holding him accountable for the forced separation from Shoto as a child, neglecting him and his older siblings after deeming them as failures, Rei's hospitalization, and what happened to Toya, to whom Natsuo was close with.[2][3] Despite his father attempting to become a better man and father to his children, Natsuo found it hard to converse with Enji and be in the same room as him without getting angry. While he agreed to attend Fuyumi's dinner arrangements, he only did this for his sister's sake and eventually stormed off, being unable to stand his father's presence.

While Natsuo is clearly troubled by his family's issues, he knows that he doesn't have the heart to forgive his father with the past weighing too heavily on him. Although he was horrified upon watching Endeavor being injured during the latter's fight with Hood, and was not above acknowledging his father saving him from a dangerous villain, Natsuo voiced on how he just couldn't forgive him, saying that he isn't as kind as Shoto and the rest of his family to do so.[4] He was also horrified to learn that his older brother, Toya, was alive and had become a villain and mass murderer. After a talk with his family, Natsuo agreed that he would side with his father, but only until Dabi was stopped.[5]

Medical Welfare Knowledge: Natsuo is a college student studying for a degree in medical welfare.[6] This suggests that he has acquired at least some knowledge of the subject.

Català Deutsch Español Français Italiano Polski Русский
*Disclosure: Some of the links above are affiliate links, meaning, at no additional cost to you, Fandom will earn a commission if you click through and make a purchase. Community content is available under CC-BY-SA unless otherwise noted.
Advertisement