My Hero Academia Wiki
Register
Don't have an account?
Sign In
Advertisement
in: Characters, Females, Deceased,
and 3 more
English

Tenko… do you… still want to be a hero?
Nao to Tenko in "Tenko Shimura: Origin"

Nao Shimura (, Shimura Nao?) was the wife of Kotaro Shimura and was the mother of their two children, Tenko and Hana Shimura. Not much is known about her currently, except that she died when her son's Quirk went out of control.[1][2]

Nao was a woman in her early thirties who was usually seen with a worried expression on her face. She had light brown eyes as well as hair of the same color which parted in the middle from her face in bangs and uneven waves that grew to her shoulders.

She had numerous clothes in Tomura's flashbacks ranging from a black shirt with jeans to a corduroy skirt. 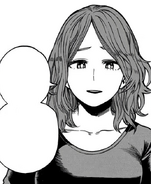 Nao in the manga.

Nao was a kind woman who showed to be troubled with her family’s state. While Nao tried to stop her husband, Kotaro, from punishing their son, she would be unable to fully intervene and only pleaded with him not to be too harsh towards Tenko. Nao was still a loving mother towards her children despite this, as she was shown comforting Tenko some time after the incident and had concern for the boy’s allergies. She also asked her son if he still wanted to be a hero despite Kotaro’s opinion, showing that she wasn’t against Heroes or the idea of her son becoming one.

It is indicated that she was aware of Kotaro’s past, which is why she did not oppose his rule of not mentioning heroes in their household. Nao also told her son that Kotaro doesn’t hate him but knows how difficult being a hero can be, possibly reflecting on her mother-in-law’s decision to leave Kotaro in foster care.

Despite this, Nao was not afraid to stand up to her husband when he had gone too far and became violent, confronting him along with her parents after he had physically punished Tenko in a fit of anger, saying that she was done following his rules if he would continue to hurt their children.

However, Nao’s love towards her son was not enough to prevent his inner turmoil from worsening as a result of the ongoing abuse. When Tenko’s Quirk manifested and went out of control, Nao rushed in to help her son even when her own body had began to crumble and fall apart, proving that she still loved him even when moments away from death.

At some point, she married Kotaro and had two children, Hana and Tenko.

One day, Tenko caused some trouble while pretending to be a hero, so Kotaro took him outside as punishment. Nao begged her husband to not get violent but still does nothing as Tenko is taken outside. As dinner was prepared, Nao asked her husband to bring Tenko back inside, noting that his allergies had gotten worse, though she was unsure what he was allergic to. Later, she comforted her son, asking him if he still wanted to be a hero. As Tenko explained the fun he had with his friend, he embraced Nao and asked her why Kotaro hated him. She states that his father didn't hate Tenko, but that he knew how hard it was to be a hero.

When Kotaro discovered that Tenko went into his office, Nao watched with the rest of the family in shock and horror and shouted when Kotaro smacked Tenko across the face. Afterwards, when Kotaro was in his office and looking at the past letters from his mother, Nao angrily confronted him, telling Kotaro that if he was going to resort to violence, then she wouldn't abide by his rules. She reminded Kotaro of what he said, that he wanted to build a happy family.

Nao went back outside with Chizuo and Mako and saw the dead bodies of Hana and her dog while the ground continues to crumble around Tenko. Even as the decay spread to her foot, Nao still reached out for her son in her final act of compassion before she was killed by Tenko's Quirk.[2]

Her disembodied hands soon end up becoming a part of her son's villain costume in the present.