My Hero Academia: World Heroes' Mission (僕のヒーローアカデミア THE MOVIE ワールドヒーローズミッション, Boku no Hīrō Akademia Za Mūbī Wārudo Hīrōzu Misshon?) is a 2021 animated film and the third movie in the My Hero Academia series.

When a terrorist organization threatens to wipe out the superhuman society, the fate of the world hangs in the balance of the future heroes. Within hours until the collapse of civilization, Deku, Bakugo, and Todoroki must work as a team, but there is one problem: Deku's on the run for murder.[2]

A cult known as Humarise worships the Quirk Singularity Doomsday Theory, believing that Quirks will eventually become so powerful they will lead to the destruction of humanity. Their leader, Flect Turn, has planted bombs all over the world filled with Trigger gas, that cause the Quirks of anyone who consumes it to to go out of control and shortly die. Humarise plans to use these bombs to infect major cities all over the globe, killing the Quirk population and saving humanity.

After one of the Trigger Bombs are activated as a warning, the World Heroes Association assembles Pro Heroes all over the globe to each of the destinations in hopes of stopping the bombs and defeating the cult. The Heroes of the Endeavor Agency, including trainees Izuku Midoriya, Katsuki Bakugo, and Shoto Todoroki, are sent to Otheon, where the supposed main headquarters is located. However, none of the Heroes all over the world are able to uncover any trace of the Trigger Bombs, and are left on standby.

Meanwhile, a street urchin named Rody Soul has been taking sketchy jobs in order to make money to take care of his younger brother and sister. This recent job is to be a courier man for a jewel robbery, however, Shoto and Katsuki easily take care of the villains, while Izuku gives chase to Rody. At the same time, a Humarise scientist, Alan Kay, attempts to escape with a briefcase in his possession, but is attacked by a Humarise agent, Beros, leading to a car crash that ends up in the middle of Izuku and Rody's chase.

In the scuffle, Rody accidentally grabs the wrong briefcase, and nearly gives Izuku the slip, but he catches up. The two fight over the briefcase until they realize it only contains books and notepads, confusing the two. Before Izuku can figure out what's up, they are suddenly attacked by the Otheon police, forcing Izuku to escape with Rody by swinging throughout the city with Blackwhip. When they are then attacked by Beros as well, Izuku escapes into the water.

Izuku gets in contact with Shoto, but things get complicated when Izuku is suddenly publicly accused on the news of murdering twelve people and put on the most wanted list, with Shoto telling him to stay off the grid for now. Izuku and Rody decide to make their way over to the neighboring city of Klayd, where the Otheon police won't have jurisdiction. Endeavor complains to the Otheon Chief of Police to no avail, unaware that he is a member of Humarise. Shoto then receives a coded message from Izuku about his new destination, and recruits Katsuki to meet him there, having figured out the briefcase they possess is related to Humarise.

During the trip, Rody becomes distressed over leaving his siblings alone, so overnight secretly reports the briefcase to the police. However, he's instead nearly killed by Humarise agents until Izuku arrives to save him and escape, having been woken up by his bird companion, Pino. Izuku is shot in the chest by one of Bero's arrows in the fight, and Rody apologizes for his actions while helping stitch him up. As they travel, the two get closer to each other, and Rody explains how he and his siblings were abandoned by everyone after his father suddenly left to join Humarise, stating that they are the most important things in life for him now.

Reaching the Klayd border, the two are once again attacked by Beros, but are saved by Katsuki and Shoto. With herself cornered, Beros jumps out of the plane. In the aftermath, Izuku discovers a hidden compartment in the briefcase, containing a puzzle that Rody remembers solving as a kid, uncovering inside a mysterious device and data disk.

The four investigate it, discovering a message from Alan Kay, who was a scientist forced to work for Humarise to create the Trigger Bombs. He reveals that he and Eddy Soul, Rody's father, created a device that will shut down the bombs for good. At the same time, Humarise announces to the world that they will detonate their bombs in two hours, forcing the deployed Pro Heroes to simultaneously help the panicking civilians and find the hidden bombs.

With no other option, Izuku, Katsuki, and Shoto use the information acquired to head to Humarise's true home base, with Rody flying them there on a plane, to shut the bombs down. While Katsuki deals with a group of killer twins known as the Serpenters, and Shoto faces off against a giant known as Leviathan, Izuku reaches the main hub and encounters Flect Turn himself. Trying to fight, he discovers his Quirk, Reflect, forces him to reflect anyone and anything that comes in contact with him, which resulted in everyone abandoning him, leading to him believing Quirks are a disease. Izuku tries to fight, but every one of his punches is thrown right back at him, which followed by an onslaught of laser attacks, leave him barely conscious.

Rody suddenly appears and seemingly prepares to betray Izuku, having made a deal with Humarise not to detonate the Otheon bomb to save his siblings. However, thanks to Pino, who Rody had revealed to him earlier is actually his Quirk, Soul, an extension of himself and shows his true feelings, Izuku realizes it's a feint and uses the opportunity to catch Flect Turn off guard. Rody is fatally wounded by lasers in the scuffle, but continues to make his way to deactivate the bombs while Izuku keeps Flect Turn at bay.

Izuku eventually realizes that Flect Turn's reflecting actually has a limit to how much damage it can take, and inspired by everyone else all around the world still fighting their hardest even when things seem at its bleakest, he pushes himself to One For All: Full Cowl - 100%, overloading Flect Turn with a barrage of punches that finally knocks the villain out for good. He arrives to the master Trigger Bomb to find Rody and Pino barely managed to insert the device in time, saving the day.

All the surviving Humarise members are arrested, and the injured Heroes are taken to the hospital to heal. As they're about to head back to Japan, Izuku and Rody bid a tearful goodbye to each other. Class 1-A reunite back at U.A., while Rody gets a job as a bartender and continues to care for his siblings, as well as looking to pursue his dream as a pilot.

Volume World Heroes is a special tie-in volume that was released alongside the premiere to audiences in Japan and America. Just as was the case with the previous two movies, this include concept sketches, interviews, and a new chapter, all by Kohei Horikoshi. The chapter, Hawks: Soothe, acts as a prequel directly before the events of the film. This is the first time a special tie-in volume was released outside of Japan.

A bonus chapter was also released in Weekly Shonen Jump to coincide with the movie, written by Yoco Akiyama, who created similar spotlight chapters for the previous two films. Titled "Endeavor's Mission", the chapter acts as a prequel as well, with the trainees being tested by Endeavor to join in on the mission. 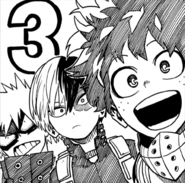 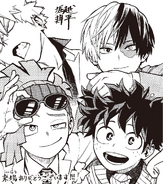 Concept of Izuku's new outfit for the movie.

Concept of Katsuki's new outfit for the movie.

Concept of Shoto's new outfit for the movie.