My Hero Academia: Clash! Heroes Battle (のヒーローアカデミア ！ヒーローズバトル, Boku no Hīrō Akademia Gekitotsu! Hīrōzu Batoru?) is an arcade game developed by Takara Tomy that lets you collect hero cards and battle with them. It was released on April 28th, 2016.

In the game, you will be able to make three person teams made up of characters from the series. You then collect cards to select those heroes. Each play will cost about 100 yen (about $0.93 USD). There is also a companion smartphone app available on the App Store and Android Play Store.

In July 2019, the game received a major update, renaming the game to My Hero Academia: Heroes Battle Rush. 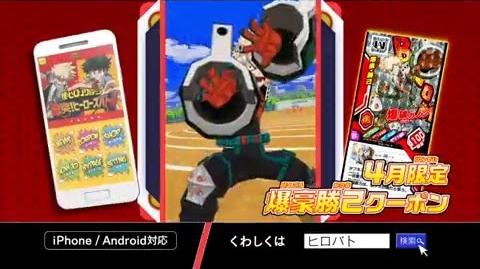