My Hero Academia Wiki
Register
Don't have an account?
Sign In
Advertisement
in: Characters, Males, Transformers,
and 6 more
English

Pretty. So pretty. No. This is work. So alluring. But no. Can't... Pretty flesh. Gah! So enticing though... Gotta do the job.
Moonfish in "Stake Your Life, Hero!"

Moonfish (ムーンフィッシュ, Mūnfisshu?) is a villain affiliated with the League of Villains and also part of its Vanguard Action Squad. He and the rest of his team serve as the main antagonists of the Forest Training Camp Arc.

After being defeated and arrested, he was sent to Tartarus prison, where he waited to be executed,[2] until he was freed by All For One.[3]

Moonfish is a fairly tall man who stands over most of his allies in terms of height. He has fair skin and black eyes. He is later shown to have a large cut on his left ear and a completely shaven head. Most of his physical body cannot be seen because the suit he wears encompasses his entire body.

Moonfish wears a black straitjacket that only leaves his mouth exposed. The suit is held together by black restraints decorated with red spikes. These same restraints connect to metal clamps that cover Moonfish's head and keeps his lips open, often causing him to drool. Other straps go across Moonfish's torso, waist, and the top of his boots.

During the final war between the heroes and villains, Moonfish is seen wearing a new set of attire. He now has a similar black piece covering his head which has a collar that covers his eyes, with longer and sharper spikes, and smaller ones on the top. He wears an ordinary shirt as well as black pants with the same spikes. His mouth is now free and the lower portion of his face is visible, although it appears that his arms are still bound. His new outfit also has a spiked ball that is chained to him.

Moonfish in the manga. 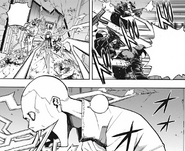 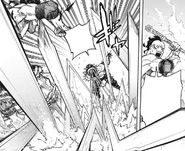 Moonfish is an insane, laconic individual who constantly talks to himself and is fascinated with consuming flesh. He has a habit of repeating key information to himself to stay focused on his objectives.[4] Moonfish can get distracted if he encounters flesh, including living people or severed limbs. His obsession even leads him to closely inspect and admire Mezo Shoji's arm after Moonfish severed it.[5]

Moonfish's actions are almost completely dictated by his crazed obsession. He likely only joined the League of Villains to gain access to more flesh rather than following the ideology left behind by Stain. Moonfish warned Shoto Todoroki and Katsuki Bakugo not to get in the way of his work because their flesh would distract him. During the ensuing fight, Moonfish constantly told them to show him their flesh.[6] He also attacked Dark Shadow out of anger because it interrupted the aforementioned fight and deprived Moonfish of his "prize".[7]

Overall Abilities: Being one of the strongest members of the League of Villains' Vanguard Action Squad, Moonfish exhibits a fierce combat aptitude. Despite being contained within a straitjacket, Moonfish is a deadly foe due to the mastery he has over his Quirk, Blade-Tooth. He primarily uses his Quirk to increase his mobility, having the blade-transformed denticles act as additional sets of limbs. In combat, Moonfish barrages his opponents with torrents of teeth attacks to overwhelm them and break down their defenses. The blades are fast and can stretch to incredible lengths, making them perfect for Moonfish to skewer his opponents from afar. Moonfish is overall a formidable, long-range combatant that can briskly dominate multiple adversaries and keep them at a distance, even while his limbs are constrained. According to Mr. Compress, Moonfish committed vile crimes worthy of the death penalty, which he evaded by breaking out of prison. This criminal reputation, alongside his fighting capabilities and deranged nature, earned Moonfish the epithet, "The Death Row Inmate".

During the Vanguard Action Squad Invasion, Moonfish ambushed Fumikage Tokoyami and Mezo Shoji, two highly formidable U.A. students, succeeding in amputating one of Mezo's arms, and forcing the pair into retreating. Soon after, Moonfish was approached by Shoto and Katsuki, another duo of powerful heroes-in-training, and was able to simultaneously repel Katsuki's rush attack and penetrate Shoto's ice defenses. Throughout this impromptu confrontation, Moonfish repeatedly and flawlessly dodged Shoto's cryokinetic structures, defused Katsuki's explosions, and cornered the pair. The bout was rendered one-sided, as Shoto and Katsuki could barely defend against Moonfish's swift and widespread onslaught and were hindered in using their fire-based Quirks whilst being in an already burning forest. Eventually, the lopsided clash was brought to an end when Fumikage returned with his Dark Shadow at full power; Moonfish assaulted the berserker-mode shadow entity, but it was wasted effort, as Dark Shadow grabbed and viciously demolished the escaped convict in a single attack.

Blade-Tooth (, Shijin?): Moonfish's Quirk gives him the ability to lengthen, sharpen, and manipulate his teeth into webs of powerful blades.

Français Polski Русский
*Disclosure: Some of the links above are affiliate links, meaning, at no additional cost to you, Fandom will earn a commission if you click through and make a purchase. Community content is available under CC-BY-SA unless otherwise noted.
Advertisement