My Hero Academia Wiki
Register
Don't have an account?
Sign In
Advertisement
in: Characters, Females, Emitters,
and 9 more
English

We've got to start at the bottom and work up! And if we don't earnestly cheer each other on... we'll never be top heroes!
Momo Yaoyorozu in "Bakugo's Starting Line"

Momo Yaoyorozu (, Yaoyorozu Momo?), also known as the Everything Hero: Creati (万物ヒーロー クリエイティ, Banbutsu Hīrō Kurieiti?), is the Vice President of Class 1-A at U.A. High School, where she got in through official recommendations[1] and is training there to become a Pro Hero.

Momo is a tall teenage girl with a buxom physique. Her Quirk’s need for fat cells requires her to keep a fuller figure than her classmates. She has long black hair that is normally tied into a spiky ponytail with a large strand hanging on the right side of her face. Her eyes are thin and sharp, dark in color and paired with short eyebrows set in a determined expression.

Her hero costume consists of a high-collared, sleeveless crimson leotard with silver lines at her waist and around her arms, which is open to expose her skin from her neck to just below her navel. She sports calf-length red boots with heels, which dip sharply down in the center, and two gold utility belts around her waist, another, thinner one around the top portion of her chest, below her shoulders. The design choice allows her to create items from as many points in her body as possible, as her Quirk can only be used if her skin is exposed.

During the winter months, she wears a long high-collared red cape and a ring going around her neck with a large gemstone at her throat.

Momo in the manga. 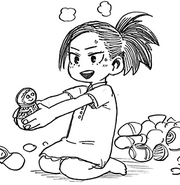 Momo as a child.

Momo in a formal dress.

Momo in My Hero One's Justice 2.

Momo is a very prudent, dedicated person who acts as a natural leader. She is generally level-headed and calm in dangerous situations, but she isn't above falling into a panic. Momo is very kind and polite, and quite reserved, yet she can be blunt with her comments about people's mistakes and miscalculations, tending to be very direct and wishing to help her peers improve enough to become great heroes, such as when she tutored her classmates at her home. Momo shows further development as a selfless hero who gets inspiration from others.

Momo typically takes adverse situations in stride, expressing little concern for losing most of her clothing in battle, as she knows how to construct another set, and would have made her costume even more revealing were it not for restrictions on exposed skin in a costume. However, this often makes others think of her as an exhibitionist. Ironically, she is rather innocent and sensitive to vulgarity and rude mannerisms, constantly frustrated by sexual advancements from Minoru Mineta and Katsuki Bakugo's crude attitude. This innocence shows that she has a somewhat casual, natural, and non-lewd view toward nudity, which explains her lack of modesty in her costume.

While originally confident in herself, Momo's pride was crushed after her rapid loss to Fumikage Tokoyami in the U.A. Sports Festival and the comparisons she made between Shoto Todoroki and herself, starting to lose confidence in her own ability to make quick choices on practical situations. It was further damaged during Uwabami's shallow internship, believing the heroine chose her despite being "an unworthy student" and tried to find deeper lessons to reassure herself.

Thanks to Shoto's encouragement on their final exams, Momo regained confidence in her quick-thinking, learning people have different skills and sometimes can compliment each other. Even when she is weakened and trapped by her opponents, she doesn't give up and shows the increase of her Quirk output, ultimately defeating her enemies.

When she displays excitement towards pass time with her friends or help them, Momo becomes upbeat and eager. She also tends to accidentally reveal how rich she is, yet most people understand she doesn't do it out of malice. Despite her mature mannerisms, she occasionally finds herself roped into silly situations such as cheerleading, although she rarely expresses much enthusiasm in doing so.

Overall Abilities: Being a recommended student, Momo possesses a good level of combat skills. Her abilities earned her 1st place in the Quirk Apprehension Test, an impressive feat considering almost all of her classmates had at least one superhuman result, and the end result was cumulative of all 8 tests. Momo held her own against Fumikage Tokoyami for a short period of time during the U.A. Sports Festival, and did the same against Itsuka Kendo in the second match of the Joint Training Battle, but lost in both instances.

On Nabu Island, Momo and Yuga Aoyama acted as the first line of defense against Nine, Slice, and Chimera, with Yuga unleashing the full power of his Navel Laser, and Momo creating 2 large cannons, all to barrage the villain trinity into separating from each other. Soon after, an exhausted Momo helped an equally overtaxed Yuga initiate a surprise attack on Nine from behind, but the undeterred villain used his Air Wall Quirk to easily defeat the fatigued duo. Her abilities eventually garnered the attention of the Magic Hero: Majestic, giving Momo the opportunity to intern under the (now deceased) top-grade Pro Hero, and improve her predictive skills and ability to act efficiently.

Genius Intellect: Momo is ranked S-class in intelligence, meaning that she can essentially be considered a genius. Her analytical skills are strong, easily devising strategies and plans in battle and urgent situations, which she has no trouble putting in motion due to her Quirk's versatility. Academically speaking, Momo is highly efficient, having been ranked 1st place in the mid-terms of her class,[2], and understanding the composition of anything she wishes to create using her Quirk. The latter is a complicated task for even the simplest materials. Regardless, Momo commonly uses the objects from her Quirk to provide auxiliary support for her allies, as well as blindside her opponents, making her a very crafty individual, and reliable comrade. What she lacks in raw strength and destructive power, she makes up for with her ingenuity. When she was paired with Shoto against Eraser Head for the First Term Final Exam, Momo realized that the Eraser Hero's Erasure Quirk has a smaller time limit due to the injury he received from Nomu, and capitalized on that small interval to blindside Eraser Head and secure victory for her and Shoto.

During the second round of the Joint Training Battle, Momo demonstrated her ability to anticipate unexpected circumstances; she took notice of the opposing team having a two-fold plan. Shoto even stated that thinking and planning under pressure or in times of crisis is Momo's area of expertise. She also has good judgment, being fully aware that once Itsuka took the match to her own strong suit: close-quarters combat, Momo herself wouldn't stand a chance. Even when overpowered by Itsuka, Momo effectively blindsided the big-fisted heroine by creating a cannon at point-blank range, making it look like she was going to fire it at the latter. Taking advantage of Itsuka's startled reaction, Momo quickly turned the cannon in another direction and fired her lucky bag over the wall of letters to give extra support to her teammates. Even though Momo provided assistance to her teammates, she was incapacitated by Itsuka, but not before the recommended student managed to tie herself to the latter before losing consciousness.

Musical Talent: Having gone through etiquette training during her childhood, Momo is capable of playing the piano and other key-based instruments.

The more she eats, the more material she has to work with, so she needs considerable food ingestion for her Quirk to be effective. However, it takes her a longer period of time and more skin exposed to create large objects, to the point where she forces large objects through her costume leaving it shredded, though she claims she can just repair it.

This aspect of her Quirk is also possibly the reason for her slim figure, as she constantly burns her body’s fat to create objects. It is also possible that this is a big weakness, in that if she creates too much without replacing her calories, she can become weak and possibly anemic.

As part of her training, Momo consumed large amounts of food to increase the efficacy of her Quirk, and reduce the amount of time needed to create objects.

Hero Outfit: Momo's hero outfit allows her to expose as much of her skin as possible so that she can use her creation Quirk much more easily.

Català Deutsch Français Italiano Polski Русский
*Disclosure: Some of the links above are affiliate links, meaning, at no additional cost to you, Fandom will earn a commission if you click through and make a purchase. Community content is available under CC-BY-SA unless otherwise noted.
Advertisement