During the time he was in prison, Destro took the opportunity to write Meta Liberation War. In this work, Destro exposes his idea of fighting against the government's control over Quirks, believing that the free use of these is a basic human right. After completing his writing, Destro committed suicide.[1]

The book has been reprinted several times, although with the last edition much of the original text has had to be modified to adapt it to the new times. There are readers who consider this biography as simple propaganda trash where Destro tries to justify the terrorist acts of his organization. Despite this, the principles expressed in this autobiography continue to influence people in the present.[2] 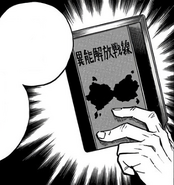 The novel in the manga.

Retrieved from "https://myheroacademia.fandom.com/wiki/Meta_Liberation_War?oldid=334676"
*Disclosure: Some of the links above are affiliate links, meaning, at no additional cost to you, Fandom will earn a commission if you click through and make a purchase. Community content is available under CC-BY-SA unless otherwise noted.