Mei is a reasonably short girl with quite a mature build. She has salmon pink hair, which is generally shoulder-length, although it does vary, which is styled into thick dreadlocks and sideswept to her right. Her eyes are wide and sloped upwards with some notably long upper eyelashes, their irises yellow with a cross in the centre, making them look somewhat like scope lenses.

In her first appearance, she wears the regular U.A. gym uniform (a dark blue tracksuit decorated with the letters “U” and “A”), but she also adds some of her own gadgets onto it, including red and gold steampunk goggles, a utility belt to hold the various tools she carries around, oversized speed-assisting boots, and what could possibly be a jet pack strung over her shoulders.

She’s later seen wearing a plain black tank top with workshop coveralls tied casually around her waist, with the same goggles on her head.

Mei is a smart, off-setting, and assertive girl, often making those around her uncomfortable. She loves creating gadgets, which she refers to as her "super cute babies". Mei has a habit of "going straight to the point"[2] and is very shameless and opportunistic when it comes to advertising her inventions. While talking to people, she has a habit of getting awkwardly close to them, which usually causes them to back away from her but she still moves up to them. She is also manipulative, as she tricked Tenya Iida into using her support equipment to promote her inventions.

Mei shows no fear when it comes to failing, seeing it as an opportunity to learn and do better next time, which is why she does not mind when her inventions fail. Mei can be seen as self-centered due to putting her love of inventions and gadgets above others, but this selfishness is not a negative as it is out of motivation to improve herself. She does seem to be a little bit absent-minded as she is easily distracted and can sometimes be completely unaware of her surroundings, as shown by her inability to sense one of her inventions catch on fire as she was speaking with Izuku Midoriya. Furthermore, she seems inept at reading body language and social cues, apparently being oblivious to Izuku's discomfort with her proximity to him on several occasions.

Overall Abilities: Outside of her intellect, Mei mostly acts as a support rather than facing battles directly. However, she proves to be a capable combatant as seen in her match against Iida, where it lasted for ten minutes with Iida unable to do anything to her despite his speed advantage and only winning when she forfeited.

Expert Inventor: Mei is very smart and innovative, creating many different pieces of equipment on her own that can help her in many situations. She relies mostly on her inventions to traverse obstacles and tasks. Power Loader acknowledges Mei's talent in the field of inventing, calling her one of a kind.[3]

Skilled Manipulator: Mei is good at manipulating people, shown when she tricked Tenya Iida into modeling her inventions during the Sports Festival final round Tournament. However, Tenya was already very gullible to begin with.

Business Savvy: Mei has a good mind for business. She took full advantage of the Sports Festival, as the stands were full of scouts from major Hero Support Equipment Companies. She teamed up with Izuku during the Cavalry Battle, knowing that people would pay attention to him, since he finished first in the previous competition. She also spent the entirety of her match against Tenya (a full 10 minutes) demonstrating and explaining her inventions to the crowd.

Zoom (ズーム, Zūmu?): Mei's Quirk allows her to make her vision zoom in on whatever is in her line of sight. If she really focuses, Mei can see things as far as five kilometers.[4]

Goggles: A pair of goggles. It is unknown if they have any practical applications aside from that of regular goggles.

Auto Balancers: A support item that takes the form of leg braces an a backpack. The function of this device is to prevent the wearer from falling, unless they intend to.

Hydraulic Bracers: A support item that detects an incoming enemy and extents a telescopic metal pole to push the wearer out of the way.

Capture Gun: A pistol that fires capture nets. it get five shots before one needs to reload it.

Electromagnetic Soles: A pair of boots that improve the wearers footwork.

Mike and Speaker: Used to broadcast the details of her equipment during the Sports Festival.

Wire Arrow (ワイヤーアロウ, Waiyā Arou?): A creation of Mei's, this device is a combination of a wire with an arrow-like grappling hook attached to the end, which can be used to reach distant surfaces.[5]

Hover Soles (ホバーソール, Hobā Sōru?): A creation of Mei's, the Hover Soles are two big metallic boots that have turbines implanted inside them, which allows the wearer to hover above the ground.[5]

Jet Pack: A creation of Mei's, this device is a metal backpack with two turbines on the bottom part of the backpack that will activate when the wearer presses the activation switch.[6]

High Density Weights (超圧縮おもり, Chō Asshuku Omori?): A creation of Mei's, this device inhibits and drains speed and stamina of a user. This allows the user to fight on the same level as a weaker, less experienced opponent.[7]

Mei and her countless inventions. 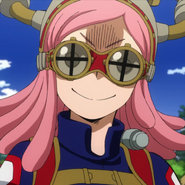 Auto Balancers to prevents the wearer from falling.

Mei using the Hydraulic Bracers to avoid an attack.

A Capture Gun that shoots nets.

Mei using a mike and speaker.

Retrieved from "https://myheroacademia.fandom.com/wiki/Mei_Hatsume?oldid=221208"
*Disclosure: Some of the links above are affiliate links, meaning, at no additional cost to you, Fandom will earn a commission if you click through and make a purchase. Community content is available under CC-BY-SA unless otherwise noted.
FandomShop DC Trivia GalaxyQuest