My Hero Academia Wiki
Register
Don't have an account?
Sign In
Advertisement
in: Characters, Females, Villains,
and 5 more
English

Pleease? I'm already a criminal, what with all the hacking. Besides, as long as I'm with you, Gentle... I'll be happy no matter what happens.
Manami Aiba to Gentle Criminal in "Unbeknownst"

Manami Aiba (, Aiba Manami?), also known as La Brava, (ラブラバ, Raburaba?), is a villain associated with Gentle Criminal. She is a side antagonist of the U.A. School Festival Arc.

Manami is a very short young woman with quite a large, round head, compared to her narrow body. She has raspberry pink hair, which she wears up in two high pigtails, wide and thick at the top and thin at the bottom, the ends curved upwards to the sides at her waist, their edges trimmed straight. She has a single bang in the middle of her forehead, swept pointedly to her right, and very large, pointed-down eyes with dark rings on the underside of each, two longer eyelashes to each far side, which take up most of her face. Her irises are oval-shaped, pink in color, and each has two circles between their small pupils and their rims, giving them a rather hypnotic look. After spending a long time secluded in her home and staring at her computer, she developed dark circles around her eyes.

Manami’s outfit is quite elaborate, consisting of a big white bow at her neck, matching the thick gloves she wears, an indigo shirt with large buttons and long, upturned frilly sleeve cuffs, and a pair of white, pinstriped pants which are very poofy, making her legs seem bigger than they are. She sports several heart motifs, such as heart earrings, heart-shaped buckles on the two thin, golden belts around her waist, and a wide heart design over the tops of her legs. She also wears dark tights underneath her pants, over which she wears a pair of shiny high-heeled boots.

In middle school, Manami was far smaller, having the appearance of a young child. Her pigtails were much shorter and she wore an ordinary school-issued seifuku; a long-sleeved double breasted shirt with a sailor-style collar and a short red tie with a dark navy blue skirt.

Manami as a child. 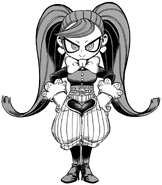 Manami’s outfit in the manga.

Manami is a loyal fan and admirer of Danjuro, making sure to record his acts to subsequently post them online, following Danjuro's instructions to interrupt a stream if needed. Despite knowing about his strength and abilities, Manami becomes worried if Danjuro finds himself in potential danger. Manami is in love with Danjuro, as shown through her Quirk, Love, as well as her undying admiration for him. Having been grateful for Danjuro taking her in and accepting her, Manami is willing to help him no matter what. She also showed to be angry with Danjuro's lack of recognition, as well as angry at the Hero Killer: Stain for having robbed his spotlight with a video of his backstory.

When Manami was a younger girl, she professed her love to a different boy through a love letter, telling him that she was completely smitten. She seems to fall in love quite freely and when she does, quite deeply. Unfortunately, this also made her sensitive to rejection, as seen by when her crush rejected her letter and even badmouthed her as a stalker. This caused Manami to fall into a deep depression where she became a withdrawn shut-in who had no aspirations, spending every day glued to her computer and even contemplating suicide. Upon seeing Danjuro's videos however, her hope and energy were both fully restored, with Manami willing to help and accompany him even with the acts of doing so making her a criminal as well.

While Manami admires Danjuro almost blindly, she has no problem with boasting over herself as well, such as when she pointed out that her hacking expertise was a key component in their plan to infiltrate U.A. High School. She also doesn’t mind doing something illegal if it means helping Danjuro or getting closer to him. The first example of this was when she hacked into his account, so she could get his address and meet her idol in person, despite apologizing for it.

Hacking Prowess: La Brava has shown herself to be a capable hacker, being able to when in range, hack into the U.A. security system and accomplish other things that only a person skilled with technology could pull off. It is stated that she is self-taught, only further backing her skills and intelligence.

Love (, Ai?): Manami's Quirk allows her to bestow a power boost to the person whom she loves most by telling the recipient how much she loves them. The amount of power her loved one receives increases with the intensity of her love. Manami can only activate her Quirk once per day and the power boost will only last for a limited time.[4][5]

Manami's stats, according to the Ultra Analysis Book

Camera: La Brava uses a camera in order to record Gentle's robberies and other villainous acts and posts them online.

Gentle and La Brava are partners, as Gentle commits crimes and La Brava records and uploads them. The two seem to be friendly with each other and exchange their motivations. La Brava also admires Gentle and his ideas, in return Gentle appreciates La Brava's efforts in helping him become a notorious villain. La Brava also has an extreme love interest in Danjuro, a love interest that he seems to have with her as well.