My Hero Academia Wiki
Register
Don't have an account?
Sign In
Advertisement
in: Characters, Females, Emitters,
and 8 more
English

The way I look at things… work, life, whatever – everything’s better when it’s interesting. But there’s nothing interesting about determination, no matter how much you’ve got.
Kuin Hachisuka to Stendhal in "Crossing Lines"

For this subject's current identity, see Bee☆Pop. For the person she possessed, see Tamao Oguro.

Kuin Hachisuka (, Hachisuka Kuin?)[1] was a student and part-time villain serving the Villain Factory in the spin-off My Hero Academia: Vigilantes.[2] With her Queen Bee Quirk, she possessed Tamao Oguro, the daughter of Knuckleduster.

Kuin's true identity is the Queen Bee itself.[3] In this form, she appeared as a queen bee with an extremely bloated abdomen.[4]

Kuin had the ability to gain control of a person's body, usually young girls, by installing inside their head, and each of her hosts had a series of similar aesthetic characteristics: she had short hair, styled so that it swept over her left eye, and visibly sharp teeth.

She wore a school uniform, which consisted of a white dress shirt with a bow at the neck, a short pale skirt and a dark jacket with white sleeves which she added over the top. She also wore dark nail polish, and also wore an eyepatch over her left eye.

As for her physical characteristics, it depended on the body she was possessing. When she was in Tamao's body, she had brown hair, with two short ahoge sticking up at the end of her parting, and green eyes. 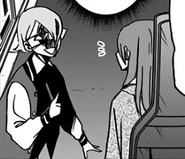 Kuin's personality was a fusion of Tamao Oguro's and the swarm of parasitic bees that had infiltrated her brain.[3] Kuin appeared to be a cheerful girl who was described as strange by her own friends. This cheerful attitude was, however, nothing more than a façade. In reality, she was a ruthless villain who did not seem to care about the destruction caused by the victims of her bees. She was also extremely manipulative and enjoyed toying with the emotions of her potential victims. She seemed to be very fond of her bees, which she called her "babies."

By utilizing Trigger, she sacrificed some control over her host body in order to achieve more strength, giving Tamao Oguro back some control.

High Agility: Kuin was able to leap from building to building with ease and run at speeds that surpass those of Knuckleduster.[3]

Queen Bee (, Joōbachi?): Kuin's Quirk allowed her to take control of a human host, as well as allow her to keep a massive swarm of worker bees in the human host with her. The bees are a hive-mind, allowing the bees to share mental messages with each other, as well as give Kuin the ability to command the bees telepathically.

The bees can contain substances in their bodies and use their stingers like syringes to inject said substances into a person's body by stinging them.[1]

When her bees are killed, the damage is reflected on her own body, as shown when Knuckleduster crushed one of her worker bees and Kuin's eye started bleeding and she felt pain.[1]

Electric Eel (電気ウナギ, Denki Unagi?): After injecting herself with a blood sample collected from the Next-Level Villain Teruo Unagisawa, Kuin was able to use Eel as a second Quirk, being able to emit electricity from her fingers.[5]

Русский
*Disclosure: Some of the links above are affiliate links, meaning, at no additional cost to you, Fandom will earn a commission if you click through and make a purchase. Community content is available under CC-BY-SA unless otherwise noted.
Advertisement