My Hero Academia Wiki
Register
Don't have an account?
Sign In
Advertisement
in: Characters, Males, Deceased,
and 3 more
English

Do you really want to know what heroes are?! They're people who hurt their own families... only to help complete strangers.
Kotaro to his son in "Tenko Shimura: Origin"

Kotaro Shimura (, Shimura Kotarō?) was the father of Tenko and Hana Shimura and the son of Nana Shimura. He was also the husband of Nao Shimura.[1]

As a child, Kotaro had dark hair and was missing a front tooth, wearing a simple t-shirt and sneakers.

As an adult, Kotaro had his hair short with a little cowlick on the right side, and he wore a striped polo shirt and black pants. 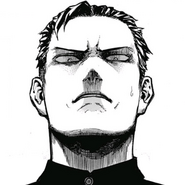 Kotaro in the manga.

From what little was seen of Kotaro's childhood, he seemed like a relatively happy and normal child, who had a close relationship with his mother. However, after his mother gave him up and left him in foster care, Kotaro's sadness developed into a deep resentment towards his mother, feeling as though she had selfishly abandoned him for the sake of her Hero duties and helping strangers. This resentment eventually grew into a hatred for all heroes, viewing them as selfish individuals whose actions only served to harm their own families.

As a result of this hatred, Kotaro strictly forbade the mention of anything hero-related in his household and would become emotionally and physically abusive towards his children whenever they broke this rule. When his daughter Hana was almost found out for having gone into his office, she showed an immense fear of him and fell into a hysterical state of panic that caused her to blame her brother to save herself, implying that Kotaro had severely punished her before. Upon believing Tenko to have been the one responsible for sneaking into his office and finding a picture of him and his mother, he physically attacked his son for discovering about his paternal grandmother and condemned her memory. Ironically, he started doing the very thing he believed all heroes were guilty of and instilled his son's future hatred of heroes and society in the process. Beforehand, Kotaro defended his actions by saying that his children should not become enamored with heroes, particularly Tenko, who had not manifested a Quirk yet, and said that his harsh behavior and actions were only to stop them from suffering in the long run.

However, in spite of his cold attitude, he wasn't completely heartless, eventually questioning his own behavior towards his family and expressing remorse for his acts. According to his wife, Nao, Kotaro had wanted a happy family, implying that he did not start out and intend to become the abusive father he was towards his children. Also, despite having resented his mother, he did express sadness when looking upon a picture of them both together and recalling his childhood with her, wishing that she didn't love him to ease the pain after reading her letter.[2] Yet even in spite of this realization, upon seeing his son lose control of his awakening Quirk, Kotaro chose to use violence as the first method to bring his son into submission and hit him with a weed clipper. Although part of this was to stop him from spiraling out of control, this physically abusive decision ultimately cost him his life.[3]

Kotaro was the only son of Nana Shimura and her unnamed husband. He was placed into foster care by his grieving mother when his father was killed to protect him from All For One. Nana also prevented her close friends from searching for him before her own death.[4]

He later married a woman named Nao and they had a daughter named Hana Shimura and a son named Tenko Shimura (later known as Tomura Shigaraki). Kotaro became a businessman, making his fortune early on and building a large house for his family, while also inviting his parents-in-law to live with them. Kotaro often punished his son for when he broke the one rule in the house, which was to not discuss anything hero-related. To that end, he put his son outside until he apologized.

One day, Kotaro discovered his children had gone into his office and confronted his son on finding the picture of their paternal grandmother. Becoming enraged, he attacked his son and voiced his disgust of heroes and his mother's legacy. This sight was met with outrage by his family, who watched in horror as this went on. Kotaro forced his son to sit outside in the dark. Later on, he stared at the picture of himself with his mother and the letter that she gave him. His wife and in-laws confronted him, as Kotaro knew he went too far and asked himself why he acted the way he did.[2]

Later that night, Tenko lost control of his manifesting Quirk, which led to him unintentionally slaughtering his dog and later his family. Kotaro was alerted by the noise and discovered the carnage, Tenko begged his father for help while the latter was stunned by his son's acts. Tenko's Quirk started to destroy the area around them, while he tried to go to his father for help, but the latter attacked him to get him to stop. Unfortunately, this act triggered Tenko’s instincts and caused him to attack with full intent to kill. He touched his father's face and killed him in revenge for all the pain he caused. Tenko's act also destroyed the house, while bringing an excited relish to his son.[3]

His lonely son would wander and go onto become the successor of All For One the very villain who killed his mother, Nana Shimura. The only thing that remained of his father was his disembodied hand that his son wore as part of his villain costume until the latter's fight with Re-Destro where he destroyed his father's hand after overcoming his trauma.[1][5]