My Hero Academia Wiki
Register
Don't have an account?
Sign In
Advertisement
in: Characters, Males, Emitters,
and 8 more
English

"Nothing like doing good to make you feel good!!"
Koichi Haimawari in "I'm Here"

Koichi is a slim young man with a rather plain appearance, possessing smooth, short brown hair and large, round brown eyes.

In his early days as a vigilante, before he met Knuckleduster, his vigilante costume consisted of his normal clothes in conjunction with one of his many All Might-haired hooded jackets. He also wore a medical mask to cover his face and protected his hands with regular gloves. Subsequently, on the advice of Knuckleduster, he renewed his appearance. He continues wearing an All Might hoodie, as he thinks that wearing an All Might hoodie makes him more effective as a vigilante, but now over motorcycle protective gear along with gloves and boots. He rarely uses a black mask to cover his mouth and a pair of tinted shades to hide his eyes.

Since the distinctive elements of his vigilante costume are the various official All Might hoodies he has, Koichi's appearance sometimes varies between missions, as each hoodie has different colors and occasionally with special edition logos on the back. His most recent one was a black hoodie, before it was eventually destroyed.

After his battle against Number 6, he now possesses a scar on his left cheek, which he received from the villain shortly before his death. As "The Skycrawler", his hero costume is a blue full body suit, akin to his traditional All Might hoodies and Number 6's "O'Clock II" costume, an updated version of his original gloves, and silver armored shoulder pads, also bearing a resemblance to Number 6's costume. He also wears a purple visor that resembles Captain Celebrity's, and has a utility belt over his waist with an "SC" on it. 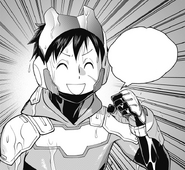 Koichi has an easy-going, mild-mannered personality. He is very generous and does not seem to expect anything from other people in return. He is somewhat unaware of social clues, accidentally gaining a reputation of being a "creepy guy", both among his peers at university, and as The Crawler. He also often accidentally insults people when trying to compliment them; he can be very awkward.

As long as he is in some form of disguise or in a more or less deserted area, he sees no problem in using his Quirk in public even though he is not a Pro Hero. He uses his Quirk to do good deeds for the public, such as picking up trash, returning lost items, giving directions, helping people get onto trains, being a cameraman, and recycling. He has a very heroic nature and cannot ignore people that need help.

He tends to be a rather calm person, sometimes accidentally making light of dangerous situations after they have passed. He is reasonable and is willing to have a dialogue with thugs and petty criminals, as seen with his interactions with the Three Sturm und Drang Brothers. At the same time, he is quick to help when there is a real need for his abilities against Villains, showing that he can be attentive as well as calm.

He dreams of being able to become a recognized hero and is shown to enjoy the vigilante work that he does. He is very willing to do the less glamorous jobs, such as cleaning up trash, and does not seem to think that these are negative aspects of being a hero or vigilante. He refuses to give up doing it just because it seems uncool because he claims that "that's not the sort of person I am", showing that he does not seem to want to be a Hero for fame or money, but out of a genuine desire to help society and other people.

Despite his dreams of becoming a hero, Koichi doesn't see it as the "be all end all" of his life. After his initial failed attempt at joining a hero course, he resigned himself to ever becoming a Pro, and was content with simply doing his vigilante work on the side, even planning to retire once he finishes university and gets a full-time job. Even when Kazuho suggests getting his Hero License, he shuts down the idea, believing it to be too much work, once again demonstrating his belief that he doesn't need to be a registered Pro in order to do things to help others.

Koichi's bravery and heroism extend to outright selflessness, especially in regards to how he treats his opponents. He will always try to talk things out before getting into a fight, and even then will only ever fight in self-defence. He also does not tend to hold grudges, treating people who have attacked him in the past like Soga Kugisaki or the Next-Level Villains with kindness, as well as protecting them from harm. Even despite Number 6's attempts and intention to kill him, each time they had a personal interaction, Koichi voiced his concern towards the villain and offered his assistance to help, which greatly confused him, believing it to all be just a "nice guy" act.

His sense of kindness is also extended to his fighting capabilities, as he is internally able to control the power of his repulsion blasts on living beings, not wanting to kill anyone, no matter the danger it puts himself in by not attempting to do so.

Overall Abilities: Koichi's skills are well suited to his role as a vigilante, with him boasting a versatile Quirk that affords him multiple ways of approaching a situation. Not being proficient as a hand-to-hand fighter, he primarily relies on his Quirk when confronting villains. At the most basic level, Koichi has such proficiency with his Quirk that he is able to jettison off at high speeds from a stand still and stop on a dime or make hair-pin turns at a moments notice. His speed is so great that it allows him keep up with the likes of the Pro Hero Ingenium and the villain Number 6, while also boasting superior maneuverability to either of them that even allows him to dodge attacks from the No. 2 Pro Hero Endeavor. Along with his speed, Koichi's Slide and Glide Quirk has a number of other uses, such as mid-air jumps, wall clinging, force fields, and repulsive force blasts.

Koichi has shown to be highly adept when it comes to making use of his Quirk's other abilities, owing largely to his constant vigilante activities spanning at least three years. His repulsive force blasts, dubbed the "Shooty-Go-Blam", can be fired pretty much automatically while also packing the power of an ordinary punch. By putting more focus into the core he can turn them into piercing projectiles which he can fire with pin-point accuracy, being able to shoot something as small as a bee even when moving at high speeds. He is also able to gauge the amount of power needed on the fly thanks to a self-devised system, though this inhibits its effectiveness when used on humanoid opponents.

In terms of martial prowess, he has been shown to have at least some means of physical combat in the form of leg sweeps, though these techniques have shown varying degrees of effectiveness, and while he has received some combat training, it is nothing he regularly employs. While he does rely heavily on his Quirk, he has shown that he can at least get by without it, such as when he proved his resourcefulness by evading Eraser Head's Erasure through his intimate knowledge of the Naruhata area as well as the usage of a grappling hook. He has been shown to have good senses, as he is able to read his opponents moves and dodge even when up close, though he can still slip up and be caught off guard at times.

Musical Talent: Koichi is a capable enough singer, being described by Miu of the Underground Idol group Feathers as "Halfway good."

Slide and Glide (, Kassō?): Koichi's Quirk allows him to slide over plain surfaces by emitting a repelling force from his hands and feet, allowing him to glide off of said surfaces. He can move in any direction, including backwards. Koichi has even displayed the ability to slide up vertical surfaces. His Quirk requires him to use at least three limbs.[4] His repulsion can be executed from any part of his body, including his back.[5]

Through several encounters, he learns that he is capable of producing repulsions through his palms, first being able to shoot a burst of air while holding an item,[6][7] and eventually energy blasts which can be rapidly fired, at increased damage intervals. During an encounter with Number 6, Koichi gains the ability to project his Quirk from any point on his body instead of just his hands and feet.

Italiano Polski Русский
*Disclosure: Some of the links above are affiliate links, meaning, at no additional cost to you, Fandom will earn a commission if you click through and make a purchase. Community content is available under CC-BY-SA unless otherwise noted.
Advertisement