Kido (キドウ, Kidō?)[1] is a Pro Hero and one of the over thirty sidekicks who work at the Endeavor Agency.[2]

Kido has the build of an average adult man whose skin is covered by either strips of clothing or bandages. His signature bandages cover his entire face and as well as parts of his arms and hands. He wears a flak jacket over a short-sleeved shirt as a part of his hero costume. 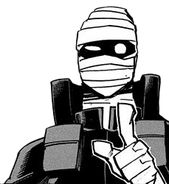 Kido in the manga.

When compared to Burnin, Kido is a much less outspoken sidekick. Nonetheless, he expresses great pride in being a member of the Flaming Sidekickers and gladly follows Endeavor's orders.

He believes in keeping a cool head and going about things logically.

Kido became a hero ten years prior to the time of the Paranormal Liberation War and its subsequent events.[3]

After the Hosu Incident and the capture of Stain, Kido and Onima are responsible for guarding the Nomu who was defeated by Gran Torino until he is arrested by the police.[4]

During the Joint Training Battle, Kido and Onima express concern about the mental state of Endeavor due to his obsession that his son, Shoto Todoroki, does not respond to his messages.[5]

Along with the rest of the Flaming Sidekickers, Kido gives a hot welcome to Izuku Midoriya, Katsuki Bakugo, and Shoto once they arrive at the Endeavor Agency.[2] Later, he helps to apprehend a villain defeated by Endeavor.[6]

During the Paranormal Liberation War, Kido helped Endeavor get the momentum he needed to get to Tomura Shigaraki.[7]

Traject (, Kidō?): Kido's Quirk allows him to redirect objects in motion that pass through his bandages. It also works on living things[8] and incorporeal things, like air.[9]