I think... there's something real tasteless about bringing a gun or a knife to a fight. Whoever's got the weapon wins, right? That ain't a real fight. Men're meant to rip each other apart with their own power. You feel me?
Kendo Rappa to Fat Gum in "Shield-and-Shield, Spear-and-Shield"

This article is about the member of the Shie Hassaikai. For the Class 1-B student, see Itsuka Kendo.

Kendo Rappa (, Rappa Kendō?), also known as The Rapper (ザ ラッパー, Za Rappā?), is one of the Eight Bullets who serves Overhaul and the Shie Hassaikai.

His face is hidden beneath the plague mask given to him by the Shie Hassaikai, and he dons a tattered t-shirt and dark pants covered by a light blue tunic and decorated with two belts. Kendo also sports his signature gloves, which cover his hands and wrists with several leather straps and his knuckles with metal.

During his time participating in the Underground Masquerade, Kendo wore a mask similar to his current one, barring the beak, and he lacked his tunic. His gloves were also much more crudely fashioned, consisting of simple plating bound by sports tape. 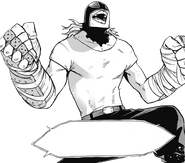 Kendo as "The Rapper"

Kendo is a very hot-blooded man who thrives on violence and bloodshed. He has a warrior-like mentality and all he cares about is seeking out a battle that can satisfy him. Kendo believes it's unbecoming for a fighter to use weapons and that everyone should fight with the power of their bodies.[2]

Unlike most of the Eight Bullets, Kendo only serves Overhaul because he hopes to one day defeat him. Kendo's entire mindset revolves around provoking others into a fight to the death where he can stake his life on the line. If someone cannot satisfy that interest, Kendo wants nothing to do with them. If someone can give him the thrill he seeks, Kendo shows them great respect.

In spite of his hot-blooded personality, Kendo does possesses his own sense of honor. He would rather fight alone and win with his own strength than fight alongside Hekiji Tengai. Kendo also allowed Fat Gum to take Red Riot to heal so they can fight again sometime. Kendo even went as far as to reveal Overhaul's plan to reinstate the yakuza.[3]

Kendo also appears to be a good judge of character, shown during his encounter with The Ripper in the Underground Masquerade. Kendo was able to discern that Iwao would enjoy a good fistfight despite the latter's conscious preference to use his Quirk for more calculated attacks.[4] Kendo's judgement came to fruition after Iwao lost his Quirk and resorted to his brute strength as Knuckleduster.

Overall Abilities: Being an Eight Bullets member of the Shie Hassaikai, Kendo is a very formidable individual. He is highly skilled in close-quarters combat and employs that art in every battle. Hailing from the world of MMA, Kendo's hand-to-hand combat prowess was forged by his experiences in the ring, adapted and changed due to the hard knocks of cage fighting. Kendo's fighting style relies exclusively on powerful punches, which can be amplified in terms of speed by his Quirk, Strongarm. When dueling, the precise repetitive motions of Kendo’s brawling technique, combined with his reflexes and Quirk usage, doesn't leave any openings, even to experienced combatants such as O'Clock.

Prior to joining the Shie Hassaikai, Kendo was a brawler that participated in the Quirk-permitted underground fight club, the Underground Masquerade. In the matches in which he partook, Kendo either defeated his opponents with a single strike, or they yielded due to his superior aptitude. He remained undefeated until his encounter with Kai Chisaki, who wanted to recruit Kendo into the yakuza due to the brawler's abilities. Kendo propositioned, that in order to gain his servitude, Kai has to defeat him in battle, but just as Kendo launched an attack, the yakuza leader effortlessly disassembled Kendo, before reassembling him. Even after becoming a member of the Eight Bullets, Kendo had the mettle to challenge Kai 5 more times, but was overhauled and defeated with each attempt. Due to his direct combat efficiency, Kai paired Kendo with Hekiji Tengai, an individual who excels at defense. When the pair tag-teams in battle, Kendo assaults the opponents with powerful bullet punches, whereas Hekiji utilizes his strong barriers to protect Kendo should the former meet his match.

During the Shie Hassaikai Raid, Kendo and Hekiji were pitted against Fat Gum and Eijiro Kirishima, both of whom are highly capable heroes who excel in defense and melee combat, just as Kendo himself does in the latter case. Kendo first sent a body-hardened Eijiro flying a good distance away with a single punch before repeatedly barraging Fat Gum with a volley of punches throughout their battle. Fat Gum surmised that getting in close doesn't yield the opportunity to dodge Kendo's assault, and due to the amount of strength behind the brawler's attacks, the BMI Hero's Fat Absorption couldn't absorb all of the damage. With these deductions, Fat Gum concluded that Kendo would wear him down until the hero was out of might. Once Eijiro regained his resolve and stepped in to endure Kendo's flurry of punches even more than he did at the beginning of the bout, the red-haired hero and the masked brawler attempted to engage each other, but Hekiji intervened with a barrier, believing Eijiro's final attack was strong enough to counter, if not damage, Kendo. However, these interferences bought Fat Gum enough time to transfer all of the accumulated energy he absorbed from the impact of Kendo's attacks, into one final punch to ultimately defeat the yakuza dyad.

Tactical Intellect: While Kendo seems to be a battle-crazed brute, he’s actually a fairly astute individual. In combat, Kendo focuses on breaking down his opponents with strategically placed punches that are structured around his present understanding of the fighting capabilities of himself and his opponents. He was keen enough to recognize the significance of Fat Gum's final attack, realizing the latter had stockpiled the impact of his punches in order to release a powerful blow that would breach Hekiji's barrier.

Strongarm (, Kyōken?):[5] Kendo's Quirk allows him to rotate his shoulders at extreme speeds, allowing him to attack his targets with a near-endless barrage of bullet punches. His Quirk can only stay active for a few seconds at a time, but this is all the time Kendo needs to wear down his opponents.

Kendo's stats, according to the Ultra Analysis Book

Battle Gloves: Kendo wears a pair of padded metal gauntlets on his arms to augment his punches.