My Hero Academia Wiki
Register
Don't have an account?
Sign In
Advertisement
in: Characters, Females, Vigilantes,
and 4 more

I'm still searching for what it is I can do, exactly. Besides… there's one person who I wanted to have hear these songs. The one who needed to hear it all… was me!
Kazuho Haneyama to Rock in "True Self"

For her identity while being possessed by the Queen Bee, see Bee☆Pop.

In her civilian attire, Kazuho looks like a timid and shy young girl, mostly seen wearing a seifuku. Her hair, eyes, and skin are all mainly pink/magenta, with the hair being a tad messy while the eyes are normally concealed by the glare of her round glasses.

As a child, Kazuho's hair was much shorter, causing Koichi to mistake her for a boy.

When Kazuho wants to use her Quirk and express herself as her alter ego, Pop☆Step, she paints a black mask, ties her hair in pig-tails, and dresses in a devilish themed one-piece black leotard with a heart-shaped opening in the center of the chest and a smaller one in the back, where it's located just below two bat wings. In addition to it, she also wears a reddish-pink bow tie, a pair of silver pearl earrings, black elbow-length gloves, a black super-miniskirt with three hearts on the belt, and black knee-high boots.

After the time-skip, her appearance hardly changes except that now she is a little taller.[1] When she temporarily became the new host of Queen Bee, her vigilante costume was modified to be more villainous and more bee-themed; the costume was more revealing, she lost the mini-skirt, the devil wings were swapped for bee wings, and her tight stocking boots were replaced with looser knee boots. She also wore thick black eye shadow, lipstick, and nail polish, and her hair swept over her left eye.[2]

After being freed from her possession, she wears an eyepatch over her lost left eye, similar to Tamao Oguro. 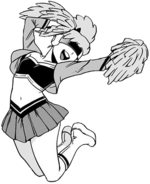 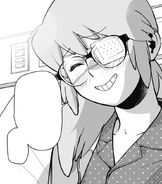 Kazuho is a very logical and intellectual person; she acts as the brains of the vigilantes. She has a habit of berating both Koichi Haimawari and Knuckleduster when either of them acts up in a way that she disapproves of. She also constantly denies having any involvement with them to the police, even though she clearly does.

Kazuho is also guilty of being rather secretive, though it could be argued that this is for good reason, as Koichi finds out her family never knew about Narufest, which also suggests they were oblivious of her status as a vigilante.[3]

Koichi notes that she has difficulty apologizing, likening her to a child. She appears to act like a more moderate tsundere, mocking and insulting her allies despite clearly caring for Koichi. Despite this, she will still mock him for his attitudes and resignation to his situation, which she feels guilty for. Otherwise, particularly with Knuckleduster, she can be confrontational, somewhat aggressive, and territorial towards him. As an Idol, she appears to love singing and performing, despite not being particularly skilled or talented in either. She does her performances with lots of enthusiasm and seems to take pride in her appearance when she performs. This vanity seems to extend to her looks at all times, including when she is not dressed up. She once told Koichi that if he called her civilian attire plain, she would kill him.

She feels guilt and is genuinely apologetic towards Koichi for an incident in the past, which resulted in her being saved by him, though at the cost of him missing an examination to attend a Hero High School, thus ending his dreams of becoming a Hero. While she wants to thank him for saving her and apologize for costing him his chance at being a Hero, she seems unable to do this easily, particularly around other people. Her crush on him also makes it even harder for her to speak to him about said topics without getting overly embarrassed.

Kazuho has shown to be somewhat unsure of her future, as upon seeing everyone else involved in Narufest eventually moving on with their lives, including Koichi planning to retire from vigilantism, she becomes lost and worried about being left alone again. She's eventually able to find a sense of expression through her music, however her innate jealously and self-deprecation towards Makoto Tsukauchi and her own crush on Koichi, allows her mental state to become vulnerable enough to be manipulated by Number 6 and become possessed by the Queen Bee.

Leap (, Chōyaku?): Kazuho's Quirk allows her to leap very high. She requires a solid surface to jump off of and the strength of her Quirk is decreased if she leaps from a non-solid surface, such as muddy ground. Her Quirk can cushion her landing after she leaps, but it won't cushion a normal fall.

Queen Bee (, Joōbachi?): While under the possession of the Queen Bee, Kazuho, as Bee☆Pop, gave her control of a massive swarm of bees, which can also grow more hostile the more she sings. Nearly all the bees are destroyed by Koichi and Endeavor, while the host bee is removed from Kazuho at the hospital.