My Hero Academia Wiki
Register
Don't have an account?
Sign In
Advertisement
in: Characters, Males, Students,
and 4 more

Wooden Swords From His Hands

Jube Namimaru (, Namimaru Jūbee?) is a middle schooler in the spin-off My Hero Academia: Vigilantes.[1]

Jube is a short and bulky middle schooler, he has chops as his most striking feature. He dresses himself as a typical Yankii (a Japanese delinquent), he wears his black jacket open with torn ends and folded sleeves, a white T-shirt, black pants, and sandals, he also wears a black cap with a black peak, and an x-shaped buckle at the middle top center, which is torn at the back that mixes in with his hair. 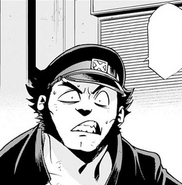 Jube appears intimidating and aggressive at first sight, but he is very kind and friendly towards his friends, being a fan and follower of Pop☆Step, he is willing to assist the Vigilantes in capturing distributors of the Trigger drug.

Wooden Swords From His Hands (から, Te kara Bokutō?): Jube's Quirk allows him to generate wooden swords from his wrists. They are roughly the length of his arms.