Johnny (ジョン, Jon?) was a small Nomu who was kept in Daruma Ujiko's secret laboratory. Daruma used him to teleport people.

Johnny presented the typical look of a Nomu, possessing dark skin, round eyes and an exposed brain, only of a much smaller size. His most prominent characteristic was that he seemed to lack the lower half of his body, which was instead replaced by a cable that connects to the bottom of his torso.

He wore a pair of pale lace-up shoes on his upper limbs and had a strange transparent helmet on his head with various mechanisms protruding from each side, one of which was used to manually activate his Quirk.[2] 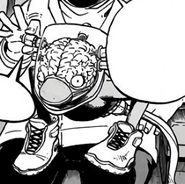 Johnny in the manga.

Nothing has been seen regarding his personality, though he appeared to enjoy going on walks.

Warping (, Tensō?): Johnny's Quirk allowed him to make a person vomit a black ooze from their mouth. The ooze then envelopes the person and serves as a medium for a portal to another location. Johnny could only teleport people to and from his own location. He also required a person he's familiar with at the other location to serve as an anchor. Overusing this Quirk gave Johnny tonsillitis.

Thanks to the helmet device he wore, Daruma can control Johnny's Quirk.[2]