Shoto concentrates his flames into a white-hot point on his fist and punches his opponent. On contact, a violent explosion of flames bursts out of Shoto's arm, severely burning his target.

This attack was first used against Leviathan, during Mission: Humarise.[1] It was later used against Tomura Shigaraki in conjunction with Nejire Hado's Nejire Flood.[2] 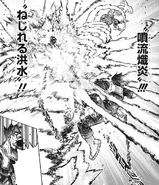 Jet Kindling in the manga.