My Hero Academia Wiki
Register
Don't have an account?
Sign In
Advertisement
in: Quirks, Transformation Quirks, Villain Quirks, All For One's Quirks
English

Unknown former user
All For One

Hypertrophy (, Hidaika?) is a Quirk possessed by All For One, who stole it from an unknown person.

The Quirk allows the user to enlarge their arm at will. The etymology and medical definition of the word "hypertrophy" also suggest this to be the Quirk's effect.[1]

All For One has been seen using this Quirk, both in combination with several of his other Quirks for a deadly attack, as well as in order to greatly strengthen his arm to restrain Hood.[2] 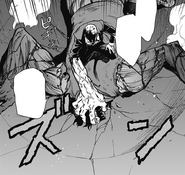 All For One uses Hypertrophy on its own.