watch 01:09
'Boku No Hero Academia' Lore: Heroes
Do you like this video?

Heroes redirects here. If you are looking for the article on the ending song, you should head to HEROES.

Heroes (ヒーロー, Hīrō?) are individuals who are licensed to use their Quirks to protect civilians from Villains, natural disasters, and/or any other kind of harm.

Those who take heroism as a profession are referred to as Pro Heroes (プロヒーロー, Puro Hīrō?).

Heroes started appearing when the Quirk phenomenon occurred and the general populace acquired superpowers. Depending on their performance, Heroes have the potential to receive government pay, along with fame and glory.[1]

The first Heroes to appear during the chaos caused by the appearance of Quirks were Vigilantes, as the Pro Hero system had not yet been implemented. The Pro Hero System was first put into place on Rhode Island in America under the "Rhode Island New State Statute". 189 Vigilantes were affected by this statute, with only seven being accepted as official Heroes.[2]

Heroes generally work in groups known as Hero Agencies. The standard is one very strong Pro Hero in charge, and a number of weaker Heroes who serve as Sidekicks under the primary Hero.

In order for a person to become a licensed Pro Hero, they must undergo an education and training program in the subject of heroism. This Heroics course is integrated into a student's high school education.

The Heroics course includes rescue training, combat training, and even training for dealing with the media.

Hero students have the opportunity work under licensed Pro Heroes. This allows the students to gain special training that their normal teachers would most often be unable to provide.

There are two types of internships.

The first type is the Hero Agency Internships, that involves a student merely shadowing a Pro Hero, listening to their advice and watching them in action for an entire week. Since the Students are unlicensed, they can't legally participate in Hero work.

The second type is the Hero Work-Studies that comes after a student has passed the Provisional Hero License Exam and has earned their Provisional Hero License. Students are allowed to participate in relief efforts during emergency situations. This allows them to gain real experience and can help them get noticed by other Pro Heroes who might want to hire them as sidekicks after they graduate.

A Hero Name is a name a Pro Hero chooses to identify themselves. While Heroes in training may choose tentative names in high school, Pro Heroes are often known by the name they first pick.[3]

Hero Names are considered very important to a professional career, as they can bring a person closer to the image they may want to cement, and are also able to reflect their true character.[4] A person may also choose to use the same name or a very similar one to an already well-known Hero that is no longer active; however, this comes with the responsibility and pressure to uphold the name's legacy.[5]

A Hero License is a certification that allows Pro Heroes to use their Quirks freely. In order to obtain a Hero License, one must complete all three years of heroics education in high school. It is currently unknown if there is an actual test that one is required to pass in order to receive their License. The first area to develop a hero license system was Rhode Island in the USA.

This gives them the authority to participate in rescue operations and combat Villains, usually acting under the guidance of an official Pro Hero.

Heroes can either work alone or in a team, depending on the needs in their field of Heroism. One example is the Wild, Wild Pussycats, a team that was initially put together for mountain rescues that actually stayed together to create a hero agency.

Most heroes work alone, starting a hero agency somewhere, but occasionally work together with other Heroes in the field on various missions, such as the raid on the League of Villains hideout.

The Hero Network, also referred to as the "HN", is a website that can only be accessed by Pro Heroes. It contains activity reports of Pro Heroes across the country, as well as information on known Villains, including their names and Quirks.

Heroes can also use the Hero Network to send requests for assistance to other Heroes who possess a Quirk that may be useful for a determined crisis.[6][7]

Biannually, all Heroes and hero teams in Japan are ranked by an event called the Japanese Hero Billboard Charts. The rating is determined by various factors, including a Hero's level of strength, number of resolved incidents, contributions to society, and public approval.

All Might used to be the No. 1 Hero until his retirement, after which Endeavor assumed the No. 1 spot. 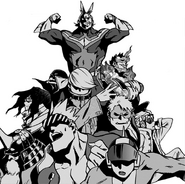 Retrieved from "https://myheroacademia.fandom.com/wiki/Heroes?oldid=307180"
*Disclosure: Some of the links above are affiliate links, meaning, at no additional cost to you, Fandom will earn a commission if you click through and make a purchase. Community content is available under CC-BY-SA unless otherwise noted.